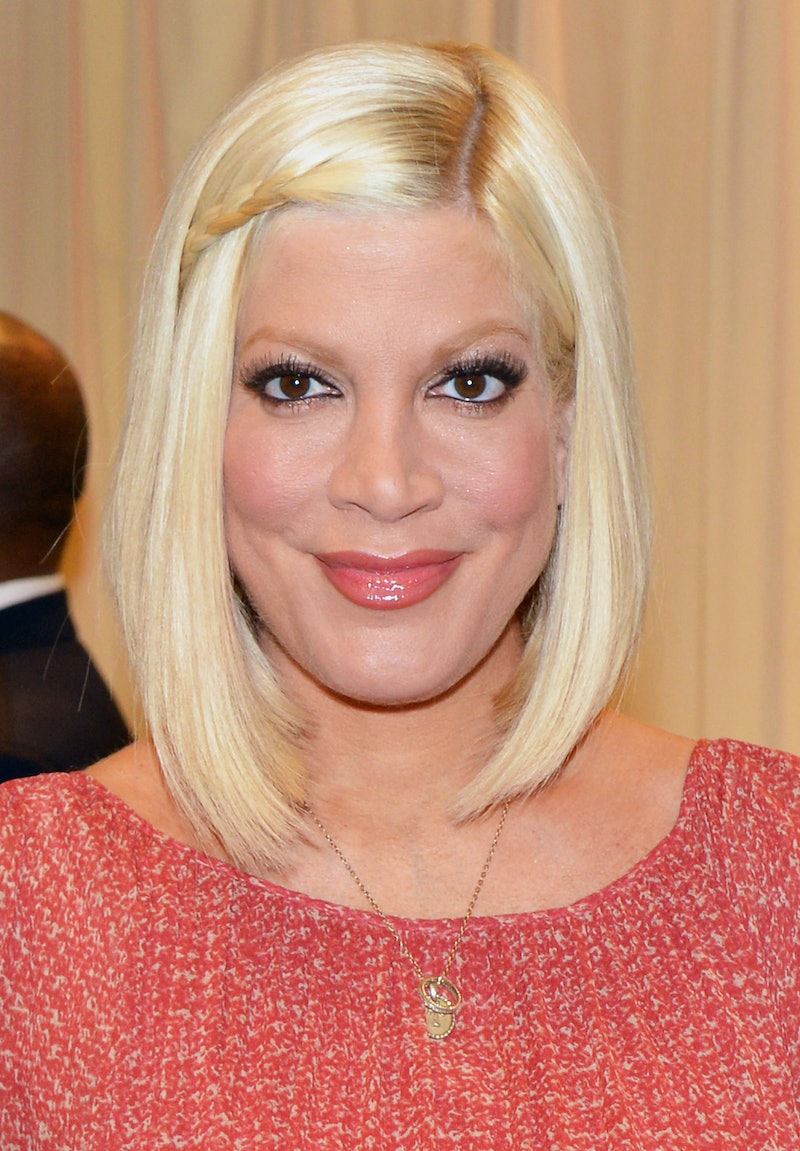 Tori Spelling overwhelms me. I genuinely felt very bad for Spelling and her family when the headlines came out about her husband Dean McDermott cheating on her. But I believe that Tori Spelling took things too far by staring in a Lifetime TV series that revolves around working through the cheating scandal with her husband. I understand reality television is Tori Spelling's main source of income, but I feel like she is pushing the envelope when it comes to what information she should share. And to be frank, I think that she creates a lot of her own drama.

I want to emphasize that I do feel bad for Tori Spelling in regard to the struggles she has been through. However, I don't agree that it's OK for her to exploit these bad times to garner media attention. I do not believe that there is anything wrong with sharing your personal life for the purpose of catharsis or to help others who have similar problems of their own. However, I believe Spelling has crossed the line many times. Recently she invited her mother Candy Spelling, who she has feuded with in the past, and Mary Jo Eustace, McDermott's ex wife to her daughter's birthday party.

It is also being reported that she invited Dean McDermott's mistress Emily Goodhand to be on the show as well. Tori Spelling has very few boundaries about what she chooses to share with the public. What am I talking about? Check out these times when Tori Spelling has gone too far.

She Wore a Hospital Mask Decorated with a Hashtag

When Tori Spelling was in the hospital for what she described as "Ebola-like symptoms," it really seemed like she was capitalizing on the trendy illness of the moment. Speaking of trends, she made sure to pose for a photo with the hash tag #TrueTori on her hospital mask to promote her Lifetime series True Tori. Just when I am starting to feel sorry for her, she just has to bring the focus back to her reality show. Shaking my head.

Who in their right mind would do this? Tori Spelling has a terrible past with all of these women. I understand why she would want Candy Spelling present to celebrate her grand daughter's birthday, but why build up the drama for the sake of your lifetime show by emphasizing how nervous you are for the event? Then on top of that she invited her husband's ex wife Mary Jo Eustace. Why would she want Eustace there when she was her ex husband's mistress? The three women even posed for a photo, of course. There are additional reports that Tori Spelling reached out to Dean McDermott's mistress Emily Goodhand to appear on the show. When will it end? There is a difference between facing your problems to gain closure and exploiting your problems for attention.

She Threw Shade from a Hospital Bed

I understand that many celebrities, especially reality stars, feel the need to utilize social media to connect with their fan base, but Tori Spelling went too far by posting this hospital photo. Clearly, she is just looking for sympathy here. She has some red lipstick on for glamour and her IV, hospital wrist bands, and a band-aid are all on display. On top of that she took the opportunity to throw some shade in the caption at a mystery person— most likely her husband or mother. So I guess she's not feeling too sick if she was able to Instagram a pic and be shady.

She sold Jason Priestly's Wedding Invitation at a Garage Sale

Of course Tori Spelling took part in the ALS Ice Bucket Challenge this past summer. Everyone from celebrities to civilians participated in the trendy philanthropic effort. The challenge was supposed to be about raising funds and awareness for those with ALS. So why did Tori Spelling wear a white tank top when she was going to be splashed with water? You tell me.

Tori Spelling asked her ex husband Charlie Shanian to talk on her TV series True Tori. He refused to appear on camera, but Tori Spelling let the cameras roll to capture her anxiety before and after the talk. Even when there is literally no conversation to show the viewers, Tori Spelling still found some way to film something to be a part of the show.

She Took a Pay Cut to Keep the Reality Show Going

Tori Spelling really wanted a second season of True Tori. She took a major pay cut and her husband does not even get paid to appear. A source told Radar Online, "The pay cut was significant. Tori is making only $50,000 to do Season 2. And Dean isn’t making a dime. Tori made sure his contract specified that.” So does this confirm that she just wants some publicity because I find it hard to believe that this show is helping her in any other capacity.

Like many of us, Tori Spelling has gone through some ups and downs in her life. I am not trying to take away from the significance of the problems that she has experienced, but I do not think that she should be broadcasting them all on such a public level. In my mind, Spelling needs to get a more fine-tuned discretion about what she is willing to share with the world.