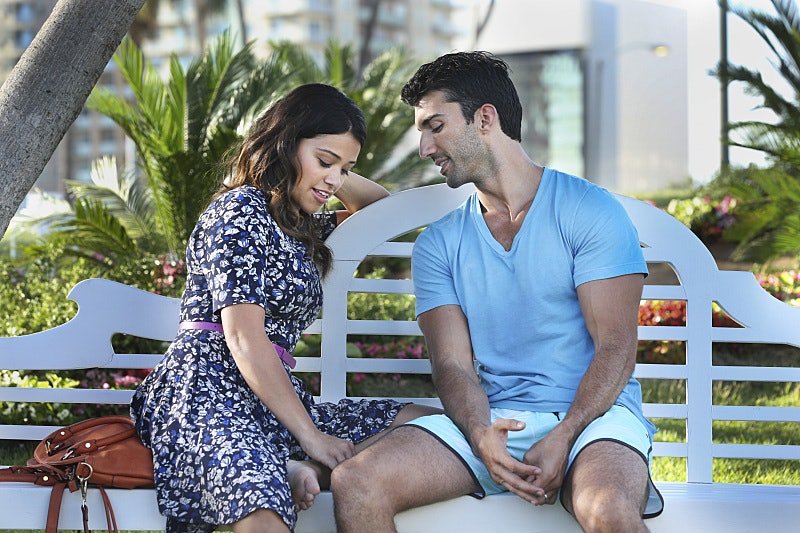 It's been a back and forth all season long as to which guy Jane was going to end up with on Jane The Virgin. Would it be Michael, Jane's long-term boyfriend who lied to Jane a lot? Or would it be Rafael, Jane's baby's father, who she once had a momentary fling with? Well, after six episodes asking would they or won't they, Jane finally dumped Michael, and Rafael finally confessed his feelings for Jane.

We knew Rafael had feelings for Jane since he had that — ahem — dream about her a couple weeks back, causing him to reevaluate the "sister" label he had handed out to the mother of his child. It was a waiting game, though, for Rafael to get out of his really terrible marriage to the really terrible Petra — who accused him of hitting her (he did not) earlier. After Petra accused Rafael of abuse, it was worrisome that he would stay with her to keep things quiet from Jane, but Rafael was able to prove that he didn't lay a hand on Petra, which caused her to drop the charges. Win for Rafael.

Because of this new found freedom, Rafael did the unthinkable — or the thinkable, since it was really all he thought about — he told Jane that he had feelings for Jane... to her face. A huge game-changer. Rafael told Jane that he has never felt this way before, citing the crazy coincidence that the two of them, who kissed five years ago, would be sitting on a bench, the parents to an unborn child. All of this led Jane to think something that she never wanted to say, "What if it's meant to be?"

I don't know if it is really meant to be, but there is definitely something there between them. Here's the problem, and the reason Jane didn't profess her feelings for Rafael: Jane was still technically engaged to Michael until the last quarter of the episode. But she does break it off with him, after he brought her to the marina, and I couldn't help but feel sorry for the guy. He seemed completely blindsided — and while I know this is all fictitious — I hope he finds someone for him (my money is on his partner!).

Another problem I have is the final moments when Rafael and Jane kiss, and it rains white rose petals. It is only episode six, are we supposed to assume that this is the endgame? Because surely a telanovela like Jane The Virgin isn't going to get the couple together this early on and keep them going strong until the baby is born and then they'll live happily ever after, right? Right?!