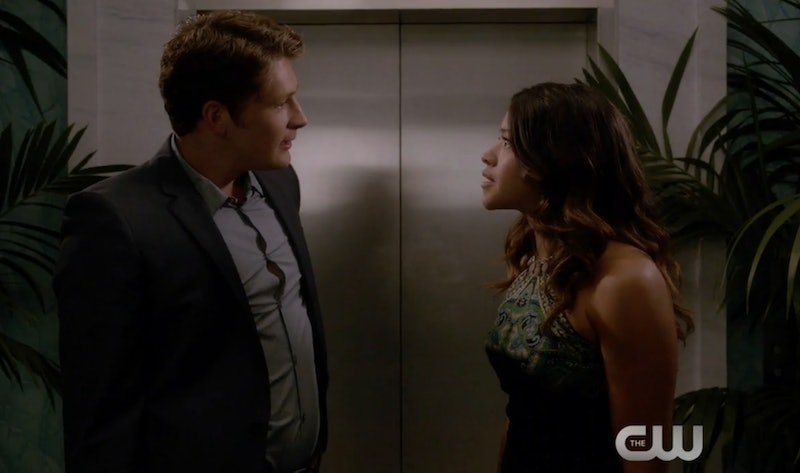 At the end of last Tuesday's episode of Jane the Virgin , Zazo died by the hand of Merlin, er the horn of marlin. Throughout this Tuesday's episode, Detective Michael and Co. tried to figure out who murdered Rafael's best friend, but the answer remains unknown. But here’s something we viewers do know: Jane has feeeeeeelings for Rafael. Bonafide, non-hormonal feelings (stick THAT in your ultimatum-loving pipe and smoke it, Michael!). And I’m all for it. I’ve tried to give Michael the benefit of the doubt, but as of Tuesday’s ep, he is not my favorite. If Jane falls in love with anyone, you bet I’m going to root that it's the SUPER FINE reformed playboy. You bet I hope that firefly does not grant her wish. (TBH, I wouldn't be surprised to find out that what we didn't see was Jane immediately snatching up a second firefly and wishing for her first wish to not come true.)

I don't care that Jane/Rafael is the obvious pair to ship. I'm shipping. I'm shipping so hard. No one is going to stop me. (Hey, while I'm here, I'm going to go ahead and ship Petra/Michael. Those two finks deserve each other!)

Ack, OK. I realize I'm getting caught up in the heartbeats and the slow dance and the arm touches. If Jane and Rafael don't end up together, that's fine. Jane's gotta do what's good for Jane. Plus, I'm more fired up about Jane not being with Michael than I am about Jane being with Rafael. I'm on edge about this wedding that's supposed to happen next week. Don't marry that fink, Jane!

THIS WEEK’S STRIKES AGAINST MICHAEL

I realize Jane getting pregnant thanks to a freak accident is a bonkers situation. I realize that there’s a chance Michael is acting irrationally out of fear. I realize he could be a super great, albeit very human guy who is struggling with the crazy scenario they're in. I realize there's a chance he'll come around and redeem himself. My girl Jane wouldn’t fall for a total dingus, would she? He's probably fine. I'm probably being unfair.

Ugh, but something tells me the sort of guy who would lie to Jane about VERY BIG THINGS and align himself with Petra—even when he knows Petra is up to no good and will probably use the baby as a weapon against Rafael—just because he's afraid he might end up with a Zach Galifianakis in The Hangover sitch is totally a dingus.

Prove me wrong, Michael. I dare you.