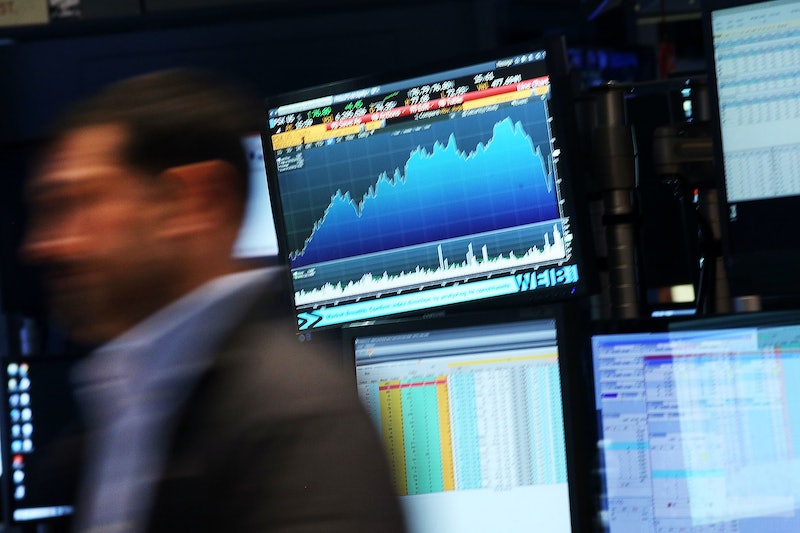 Apple can be credited with many things — the revolutionary iPhone, products that are functional as they are beautiful, my MacBook that shockingly hasn't burst into flames yet considering how much it's been manhandled — and now the tech giant has a new milestone to add to its achievements: Apple is worth more than Russia's entire stock market. Did I hear a collective gasp?

Bloomberg reported Friday that Apple's net worth reached an all-time high of $652 billion after it gained $147 billion in equities as of November 12. Russia's, however, decreased by $234 billion to $531 billion this year. That means one single company, Apple, has a grand total of $121 billion more than all the companies listed on Russia's stock market combined!

The wide disparity in financial value between Apple and the Russian stock market is that while Apple has gone from strength to strength in the still-burgeoning tech industry to become "the world's most valued company," according to Bloomberg, Russia's economy took a huge hit after Western economic sanctions were imposed in the wake of the continuing crisis in Ukraine. The country is also suffering from a weak Russian Ruble, which fuels inflation, and falling oil prices that decrease export profits.

Bloomberg said economists surveying their data have warned that there is a 70 percent chance Russia's economy could plunge into a recession in the next year. The country's political conflicts and potential economic status scare investors away, Vadim Bit-Avragim, a portfolio manager involved in overseeing about $4 billion at Kapital Asset Management LLC in Moscow, told the publication. He added:

After all this, when you get involved in conflicts with your neighbors, it becomes very hard to persuade investors from all over the world to invest here.

And on the other end of the spectrum, Apple is doing really well — its CEO Tim Cook said that demand for the iPhone 6 was "off the charts," having shipped 39.27 million smartphones in its fourth quarter, after its launch last month.

So currently, Apple has surpassed Russia, who has the world's 20th-biggest market. The company, reported Bloomberg, is also bigger than Singapore and Italy, who rank 17th and 18th respectively in market size. To be worth more than the stock markets of some developed countries — that sounds like a tremendous achievement to me.

It's also funny, considering the scorn that a Russian politician poured on Cook after he revealed he was gay. Petersburg City Council Member Vitaly Milonov wanted to ban Cook from Russia for life, fearing he would bring to the country — along with his scandalous sex orientation — Ebola, AIDS, and gonorrhea.

Who's laughing now, Mr. Milonov — you, or the CEO of the richest company on the planet?

More like this
How To Fight For Reproductive Rights, Based On How Much Time You Have
By Courtney Young
The Music Industry Continues To Fail Black Women
By Precious Adesina
Sarah Everard’s Killer Wayne Couzens Is Appealing His Whole-Life Sentence
By Sophie McEvoy
How Gemini Season 2022 Will Affect Each Zodiac Sign
By Brittany Beringer
Get Even More From Bustle — Sign Up For The Newsletter