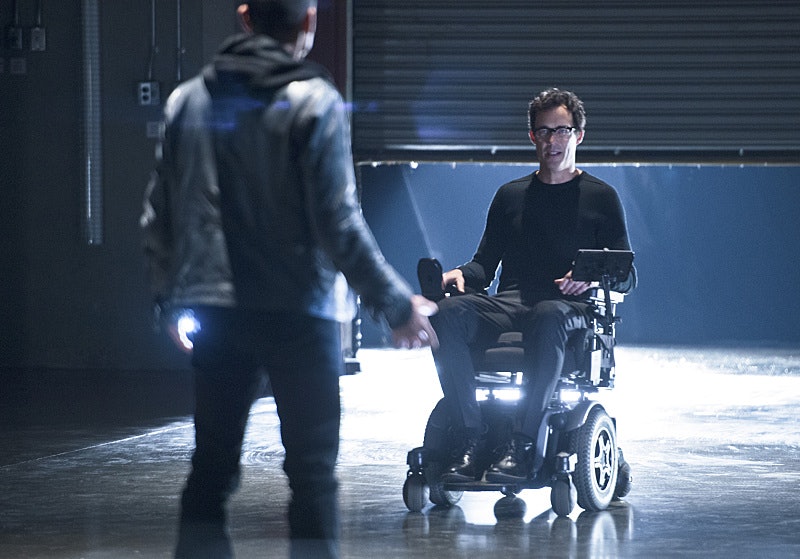 There have been enough theories about who Harrison Wells really is to last a lifetime. Is Harrison Wells Professor Zoom, whom we know for sure is going to appear on The Flash this season? Or is Harrison Wells future Barry Allen trying to adjust his own timeline? The reason why it is so easy to spin all these theories is because the show is ripe with hints to various characters who have crossed paths with Barry in the comics. So are Wells' actions the work of an unhinged good guy with brutal means or a total villain? Even though many people are betting that he is Professor Zoom, I have a feeling the writers are setting him up to be a far more morally gray character. Or at least I hope so. I honestly wouldn't be surprised if Harrison Wells is revealed to be Max Mercury, another speedster from the DC Comics Universe.

Max Mercury would be an interesting, out-of-left-field reveal for the show. On one hand, he may be a bit too much of a deep cut from The Flash mythos this early in the series. Mercury is a character rooted in the past of the 1830s. Mercury gains his abilities which include super speed, dimensional manipulation, and time travel from a dying shaman and tends to travel into the future adapting new aliases along the way. Mercury is probably best known as being the mentor for several different Flash's including Wally West. His mentorship and man out of his own timeline dynamic remind me greatly of Wells on The Flash.

While Mercury may be more associated with mentoring Wally West rather than Barry Allen, The Flash has shown that it doesn't mind playing with the canon. Barry is far more lovable and dorky than I remember him ever being in the comics, evoking the version of Wally fans remember from Justice League Unlimited crossed with Peter Parker. Also, the tidbit of Barry having to eat a lot to make up for his ridiculous metabolism is straight out of Wally West's playbook. Another interesting fact about Mercury from the comics is that, at one point, he came out of retirement to fight Professor Zoom when he was pretending to be Barry Allen. So, it isn't outlandish for the show to have Barry involved with characters that are more associated with other characters from The Flash's side of the DC Universe.

Besides Mercury's mentorship of Barry and the time travel angle, there was a very telling line a few episodes ago that made me think of Max Mercury: Remember when Wells killed Simon Stagg? As Stagg discusses his amazement over metahumans he describes The Flash as seeing "Mercury on earth." Of course, on the surface, he's alluding to the Roman god who shares quite a few traits with The Flash. But this is a comic book show. The writers know what they're doing dropping all these hints to a variety of characters.

Could it be a red herring? Sure. But I like to think that the writers won't box Wells in as a villainous mastermind whenever his true intentions are fully revealed. It would be more interesting to see him somewhere between outright good and evil. I wouldn't be surprised if he is indeed Max Mercury after significant time travel who wants to make sure Barry will be on the right track as a superhero after he gains knowledge of various future events. We've also seen that Wells has some moral lines he won't cross by ending his partnership with General Eiling to protect Gorilla Grodd. But in the same token he protects Grodd for his own plans.

So who is Harrison Wells? That's the question on every fan's mind. It is still far too early in the first season of The Flash to write him off as truly being a good guy with underhanded means or a villain playing Barry's trust against him. Wells being Max Mercury offers the writers a chance to delve deeper into DC Comics lore giving Barry a mentor who knows much more than he does and willingness to get his hands dirty that is ultimately for the greater good.

No matter what theory you believe, I think we can all agree that watching Harrison Wells has been one of the brightest parts of this wonderfully joyful new show.