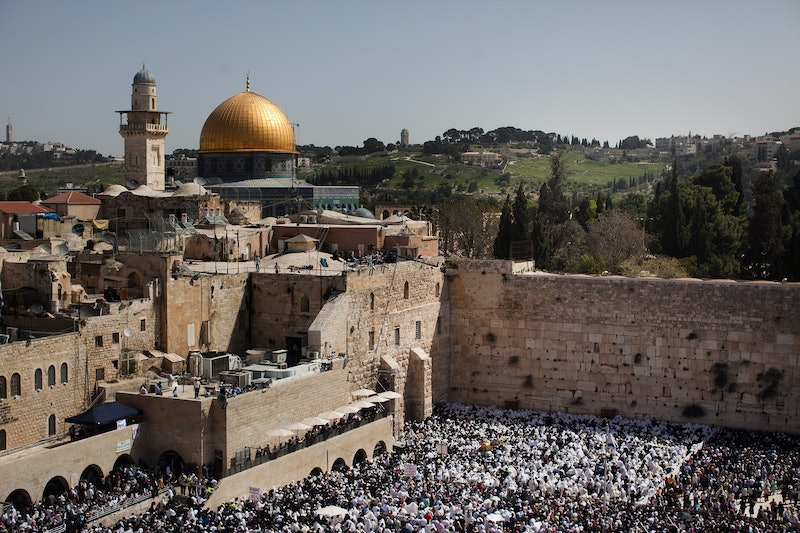 Four people were killed Tuesday morning when two Palestinian men attacked a synagogue in Jerusalem, wielding meat cleavers and knives, and firing a handgun. According to BBC News, the attackers killed four Orthodox Jewish worshipers and injured eight others before being shot dead by Israeli police. Three of the victims are dual Israeli-U.S. citizens, an Israeli police spokesperson confirmed.

The early-morning attack on the synagogue in the Orthodox Jewish neighborhood of Har Nof in West Jerusalem is the deadliest violence the major Israeli city has seen in years. "To see Jews wearing tefillin and wrapped in the tallit lying in pools of blood, I wondered if I was imagining scenes from the Holocaust," Yehuda Meshi Zahav, leader of an emergency-response squad, told The New York Times.

Israeli authorities believe the two men were cousins from East Jerusalem. CNN reports that Israeli police went to their neighborhood following Tuesday's attack, arresting nine people. "We're continuing to search the neighborhood to make sure there are not any further terrorists," an Israeli police spokesperson told the news source.

Mark Regev, spokesman for Israeli Prime Minister Benjamin Netanyahu, added to CNN that there will be greater Israeli police presence in Jerusalem to ensure that there are "no copycat attacks." Meanwhile, Netanyahu's office posted a message to his official Twitter account, saying the Israeli government will "respond with a heavy hand." Netanyahu's Twitter statement also criticized the international community for "irresponsibly ignoring" Hamas leadership, which he believes has been inciting malicious behavior among Palestinians. The prime minister is inviting his aides to a security consultation meeting in his office on Tuesday afternoon.

Netanyahu's office also posted a graphic photograph claimed to be taken at the site of the attack. The photograph shows pools of blood on the synagogue floor beside blood-splattered prayer shawls and a stained-red Torah.

The Jerusalem Post has identified the four victims — all were rabbis who lived in Har Nof, a neighborhood in West Jerusalem that's home mostly to Orthodox Jews. Victims Rabbi Aryeh Kopinsky, Rabbi Calman Levine and Rabbi Moshe Twersky made aliyah — to immigrate to the land of Israel — from the United States, holding both Israeli and U.S. citizenship. The fourth victim, Rabbi Avraham Shmuel Goldberg, was a dual British-Israeli citizen, according to The Jerusalem Post.

The funerals for the victims will be held in Jerusalem Tuesday afternoon.