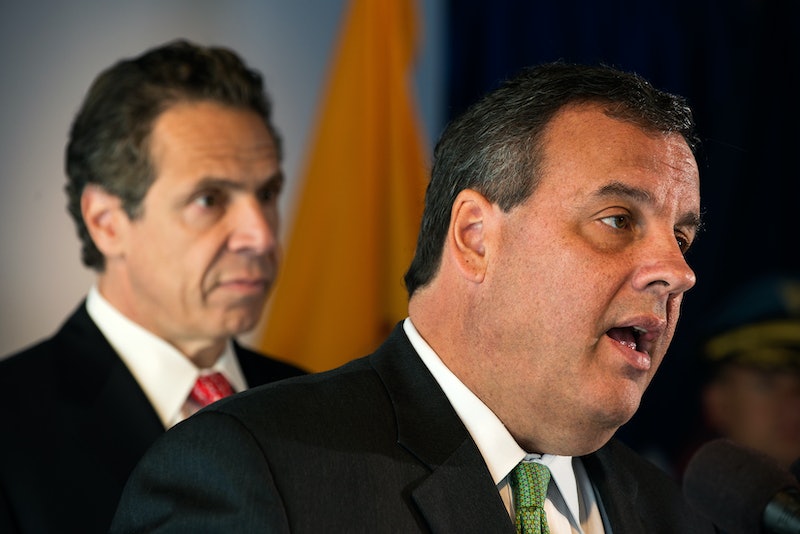 Ebola hysteria has quietened down in the United States, but one person is certainly keeping the paranoia alive. New Jersey Gov. Chris Christie has staunchly defended his mandatory Ebola quarantine policy, which he enacted in his state in late October following Dr. Craig Spencer's diagnosis, despite widespread criticism — including from President Obama — that the stringent rule would discourage aid workers from going to West Africa, where relief is desperately needed to curb the spread of Ebola. Now it looks like opponents of the policy were right. After it was implemented, Christie's mandatory quarantine has sparked a decline in relief workers who volunteer to treat patients in West Africa, according to relief organizations.

International Medical Corps, an LA-based humanitarian and relief nonprofit that has Ebola treatment centers in Sierra Leone and Liberia, has seen a significant drop in the number of volunteers since the mandatory quarantines were enforced. The organization's spokesperson, Jaya Vadlamudi, told NJ Advance Media:

We have seen a reduction in the number of volunteer applications for the Ebola emergency response. The quarantines and travel restrictions are seriously hampering the group’s ability to recruit qualified health care workers and volunteers. These restrictions will only worsen the outbreak's spread, making it far more difficult to deploy workers to the front lines and combat this devastating disease at its source.

The federal United States Agency For International Development, which helps to assign health volunteers to relief organizations in West Africa, has also seen a decline in the number of applications since the quarantine policies were enforced. A 17 percent drop, to be exact. And Doctors Without Borders has been struggling to keep its staff abroad. Its press officer Tim Shenk told NJ Advance Media:

For U.S. staff, especially as state [quarantine] policies changed, some people shortened their assignments due to the restrictions they face when they return home.

This was exactly what President Obama warned of in his statement on October 28, in which he said we mustn't "discourage our healthcare workers from going to the frontlines" and that any policy the U.S. implements should be "supportive of their efforts." However, Christie's policy, which has been replicated in several states since being implemented in New Jersey, is in direct opposition of Obama's aim.

On October 24, Governor Christie and New York Governor Andrew Cuomo announced the policy in their respective states, with Cuomo saying, "Since taking office, I have erred on the side of caution when it comes to the safety and protection of New Yorkers, and the current situation regarding Ebola will be no different."

After the initial backlash, Christie defended his decision on Fox News Sunday, saying, "I don't think when you're dealing with something as serious as this you can count on a voluntary system."

But perhaps the most serious ramification of the mandatory quarantine is the stigmatization of health workers as threats to the public. Doctors Without Borders executive director Sophie Delaunay said in a statement:

[Doctors Without Borders is] witnessing rising stigmatization and vilification of health workers, which is creating a chilling effect on efforts to combat the Ebola outbreak at its source in West Africa. Quarantine measures have fed this rising stigmatization by feeding misperceptions that health workers constitute a de facto threat to public health.

This is the thanks that we give to these brave men and women who risk their lives to save others and stop the outbreak? It seems so, according to Christie.Images: Getty Images (3)