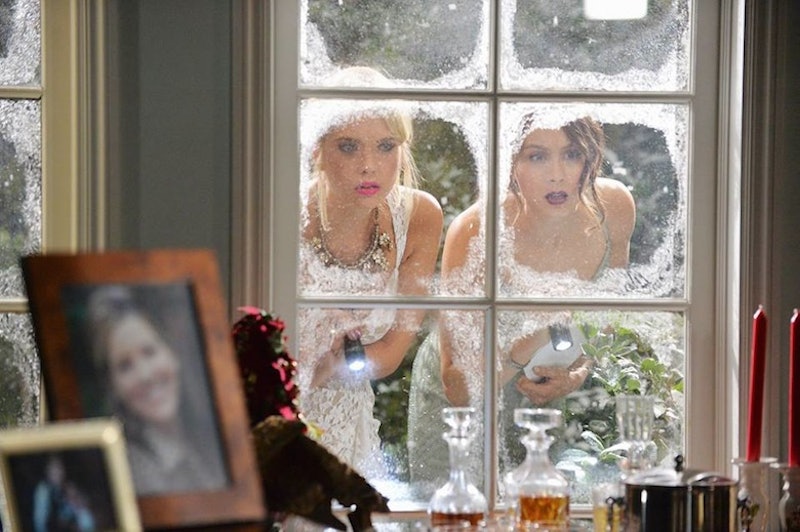 Straying from something we really love about Pretty Little Liars , the show is doing a Christmas special this year in lieu of their usual Halloween shenanigans. I have loved everything about the Halloween episodes of PLL, because they acted as standalone stories, yet still moved the plot along. Also, the Liars always had the most killer (pun!) costumes. In a change of pace, there were no awesome Halloween costumes this year, but instead the promise of a snow day. Before its return for Season 5B, PLL is giving us a snowed-in Christmas special during ABC Family's 25 Days of Christmas, set to premiere on Dec. 9.

Now, trying to compare this upcoming Christmas special with what we already know and love about the past Halloween episodes will be like trying to compare apples and oranges. They're both from the same delicious fruit family, but so very different at the same time. As much as I love the three Halloween episodes (PLL didn't do one during its first season), it'll be nice to have a change. Besides, what's better than a little holiday spirit with a dash of "A" mystery? If you're someone who's a little hesitant about what's coming up in "How the 'A' Stole Christmas," don't worry. It'll still bring the same kind of PLL drama, and insanity, that we know and love. Now it's just got a different holiday background. If you ask me, there are no cons in this situation, only pros.

Halloween was all about the Liars' costumes. Swapping out over the top costumes, the Liars are instead opting for perfectly worn winter gowns, and I want to know where I can buy every single one of them. PLL has, oddly enough, been at the forefront of fashion, and once again they are hitting the nail right on the head.

Each Halloween episode has given us a huge moment of reveal, and last year's might have been the biggest one yet when we learned that Alison was still alive. How is the show going to top that this year? I think we already learned a whole lot of stuff during the first half of Season 5, so it's really anyone's guess as to what we learn next (and seriously, it's a guess. Because it's impossible to even try to predict what strange twist the show will take next). But be prepared for some sort of big info drop, if only to hold us over until PLL's return in January.

Was the idea of a Halloween party train absolutely ridiculous? Yes. However it was so much fun regardless, even if I couldn't figure out the actual logistics of how that party train worked (like, how do you get back to your car at the end...?). The Christmas episode has the Ice Ball, which is being thrown by none other than the Hastings Family. It appears to have lots of dancing, fake snow, and masks, because PLL loves its masks. No, there might not be any haunted houses involved, but there will probably be some sort of verbal brawl in a sparkly gown.

Spencer is a pro no matter what holiday we're talking about. As we learned from the PLL Halloween special, Spencer hasn't been charged with murder, thankfully, and is out on bail. Still, she'll feel somewhat like a sitting duck. But knowing Spencer, she's already concocting some sort of plan to figure this whole thing out, and will make a billion obscure literary references while doing it — just like on Halloween.