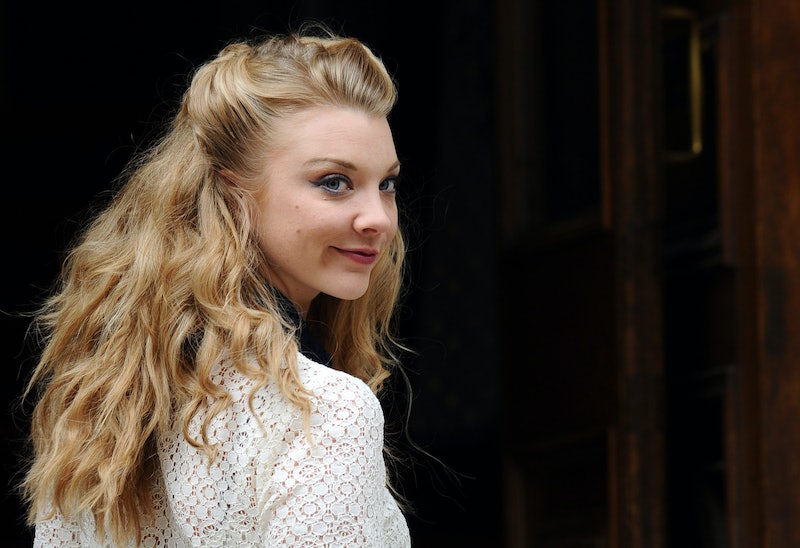 One of the biggest spectres that sits on the shoulder of HBO's hit series Game Of Thrones is the unceasing knowledge that the actual books the show is based on have no all been published yet — or even written. It certainly hangs over Game Of Thrones star Natalie Dormer — her character Margaery's storyline is [spoiler alert?] about to catch up with the show. So what on Earth (or in Westeros) is next for Margaery Tyrell?

Dormer's been making the rounds right now to promote The Hunger Games, Mockingjay, Part 1 — in which she plays documentarian Cressida. But Game Of Thrones is never far from the public's mind, so naturally the topic came up during her appearance on Conan. As she tells is, they just wrapped filming Games Of Thrones' Season 5 — and where we find Margaery is awfully close to where she is where she's last scene in the books. "I'm entering into the fraternity of what the fuck's gonna happen to me now," she says.

The pressure is certainly on for A Song Of Ice And Fire director George R. R. Martin, both to not die before finishing this story and to wrap things up sooner rather than later. There's already a divide between die-hard fans of the books and Game Of Thrones' showrunners, I can't imagine that would get much better if we were to enter a space where said showrunners are tasked with charting the next storylines all by their lonesome.

Watch Dormer's explanation of her predicament below, and stick around for her description of her ideal way to die in the series.