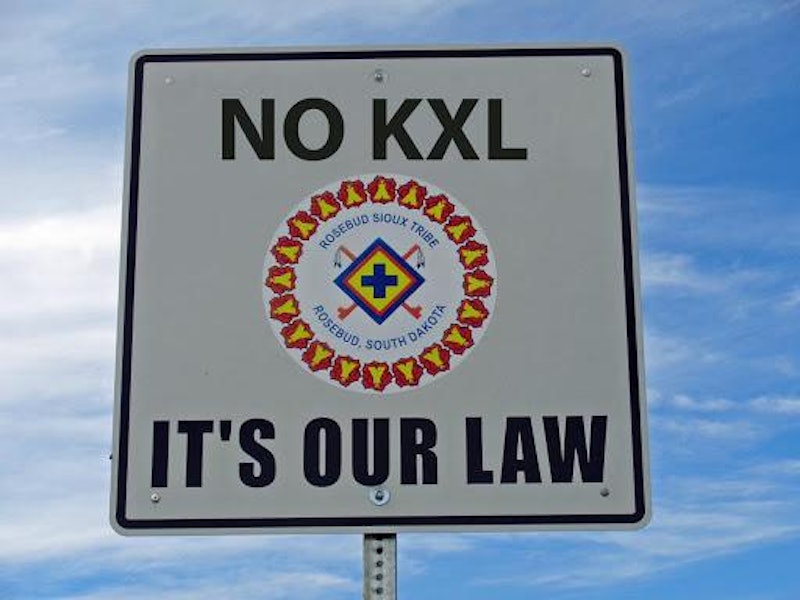 With the Republicans winning big in the midterm elections earlier this month, it seemed lie only a matter of time before the Keystone XL oil pipeline would be back in the news. The longtime GOP hobby horse, a bane to left-wing Democrats and environmentalists, has been a go-to political talking point over the last few years. Now, with their new congressional majority, the House decided to pass a bill approving Keystone XL. But they forgot something — according to the Rosebud Sioux Tribe, the Keystone XL House vote was an "act of war."

Basically, the proposed leg of the pipeline is slated to run through Native land in the Great Plains of South Dakota. Land belonging to the Rosebud Sioux, who according to tribe President Cyril Scott were not adequately consulted about the proposal before the House's vote to force its approval. As detailed in a post the tribe published on Facebook in late October, they'd applied for party status relating to the Keystone XL issue — basically, insisting the tribe had to be involved in the process, because they were resolutely against the pipeline's construction on their lands.

But, to hear Cyril tell it, no mind was paid to their objections — a fact he considers a violation of the sovereignty the Rosebud Sioux are guaranteed through treaties.

The House has now signed our death warrants and the death warrants of our children and grandchildren. We are outraged at the lack of intergovernmental cooperation. We are a sovereign nation and we are not being treated as such. We will close our reservation borders to Keystone XL. Authorizing Keystone XL is an act of war against our people.

This isn't a new position for the Rosebud Sioux, as Native tribes in the region have decided before that they wanted no part of Keystone XL. Back in February, different tribes within Great Sioux Nation came out in official opposition, largely on the same environmental and conservationist grounds that environmental groups have had. While oil pipelines are by and large always sold as entirely safe, there's also a robust history of environmental crises caused by pipelines gone awry, whether by accident or through corporate negligence of safety.

Speaking to reporters after arriving in Washington, D.C. Tuesday, Scott explained that he swore an oath of office to protect his tribe for seven generations, and as such, he can't allow Keystone XL.

When I was elected and took my oath of office, I said I would protect the next seven generations. I have that obligation not only as president, but as a warrior of the tribe.

Of course, Scott was speaking of a legal war, by no means a literal one, but it'll be fascinating to see where this goes. Given the pipeline's planned path right now, a legal battle over the Rosebud Sioux's sovereignty would be both highly compelling, and crucially important. Assuming it comes to that, that is — while it's still early, reporting suggests the Senate is a long-shot to successfully pass the House bill approving Keystone XL.