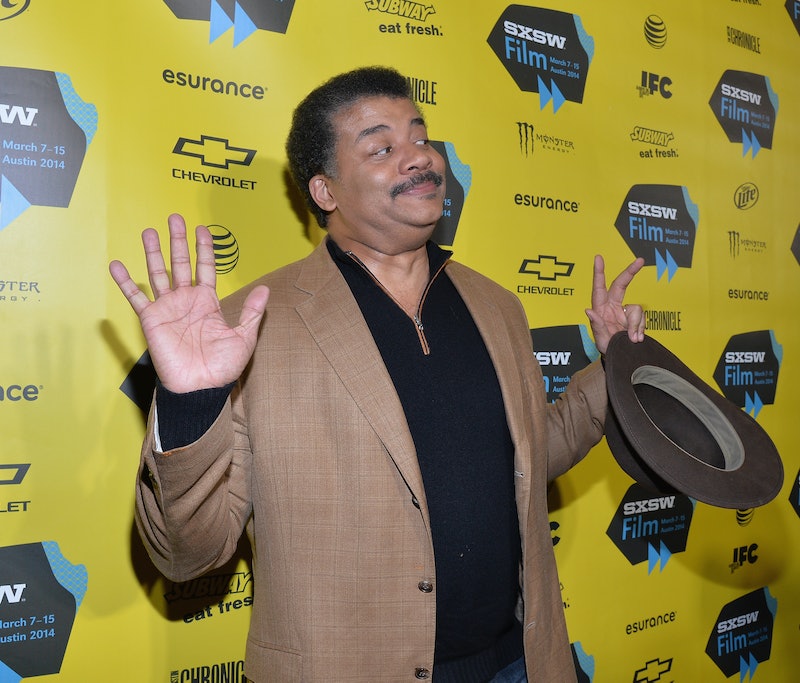 We can all agree that Neil deGrasse Tyson is the best, right? And if not, then maybe this will convince you: During a recent lecture, Neil deGrasse Tyson gave life advice to a six-year-old — and not only was it exactly the perfect answer to her question, but even better, it was life advice every single one of us should be following. And hey, guess what? There’s a video of it. Consider this your life-affirming piece of wonderfulness for the day.

According to the video’s description, the exchange in question happened at the College of the Holy Cross in Worcester, Massachusetts, on November 13. First off, I would like to note that the six-year-old girl featured in it was wearing a shirt adorned with a picture of Einstein riding a bicycle across the galaxy, because that’s delightful. Second, her question was probably one of the most important things anyone could ask when given a few moments of Neil deGrasse Tyson’s time: “How can first graders help the earth?”

As you might expect, his response is magnificent; as Alicia Lute wrote at Nerdist, “I mean, if that doesn’t convert every kid into a budding scientist, artist, or explorer, I don’t know what will.” True that. But I also think it’s something even grown-ups could stand to remind themselves of every so often, so here’s how it went down.

First, Tyson sat down on the ground so he could see eye to eye with her:

And then he said this:

“When I was in first grade, I was curious about a lot of things. So here’s what I want you to do: When you go home and you start poking around the kitchen — have you ever done that? Have you ever opened the cabinets and pulled out the pots and pans and started banging on them? That’s fun, right? Did your parents stop you? Yeah. Tell them to not stop you. Because you’re just being a kid and you like to explore things. Your parents don’t like it because it gets the pots and pans dirty, and because it’s noisy; but for you it’s fun, and you’re actually doing experiments. What does the wooden spoon sound like on the aluminum pot? Or the metal ladle sound like on the steel pot? And they all make different sounds! And it’s fun! Right?”

Heck yes, it is! But he wasn’t done yet; he then embarked on another thought experiment by asking her, “Okay, another thing: If it’s raining out and there’s a big puddle, what do you want to do with that puddle?”

She said, of course, “Jump in it!” Because what else are you going to do with a giant puddle? He continued, “You want to jump in it. And so, do your parents let you jump in it?”

She started to say “yes,” then switched to “no,” giving it the kind of “Ye — noooo…” effect that is always so marvelously comedic. To which he replied, “Tell them that Dr. Neil deGrasse Tyson said to let you jump in the puddle…"

And then he rolled around on the floor:

Because why the hell not.

He finished up with the following:

“Because when you jump in a big puddle, first, it’s fun, right? It’s completely fun — and you are making a splash crater. So these are experiments. Just tell your parents that they’re experiments, and that you want to become a scientist, and then they won’t stop you from doing anything you want.”

And he’s absolutely right. We can help the earth by being curious, by exploring, by seeking out new knowledge and finding out things we never knew before. We can help it by broadening our horizons, by asking questions, by thinking expansively rather than limitedly. We can help the earth by remembering that it’s an amazing place, and that the creatures who populate it are amazing, too. We can help it by approaching problems positively instead of negatively. Even if you’re not a scientist, looking at our world through this lens will open up a whole new way of seeing things. And that is awesome, both in the slangy sense and in the original one. Life really is awe-inspiring. Let’s not forget about that.