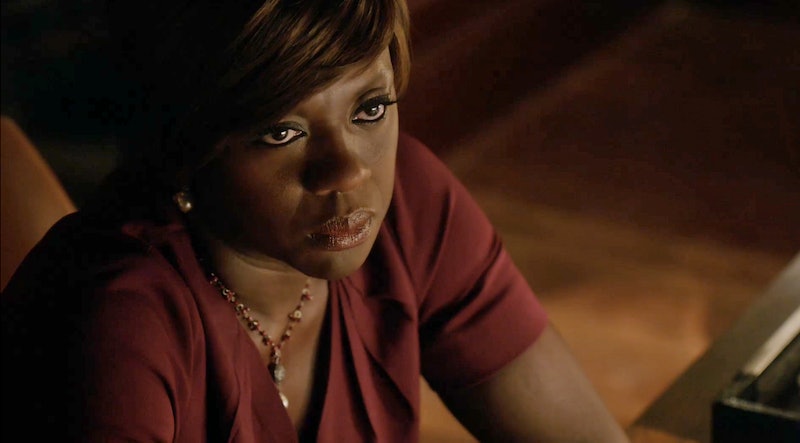 Like millions of others, I'm hooked on Shonda Rhimes' How to Get Away With Murder . I love the mystery, I love the law students, and most importantly, I love Viola Davis. But as Thursday's winter finale draws near, I have one nagging question about the show that I just need to get off my chest: Why is Annalise Keating so upset with her husband, Sam, for cheating on her when she cheated on him, too? Annalise has cried many tears over Sam's affair with the now-deceased Lila Stanguard — but did she forget that she was carrying on her own affair with hunky police officer Nate Lahey? Also: Why is Annalise surprised by Sam's behavior when he cheated on his previous wife to be with her in the first place? As they say, "Once a cheater, always a cheater." OK, I need to talk this out.

First of all, while it might not seem "fair" for Annalise to be upset with Sam, I have to recognize that we're all human and we can't exactly control the way that we feel. It's unfair for me to question Annalise's emotional response — it is what it is and her feelings are legitimate, end of story. I get that now. Second of all, getting cheated on sucks, and I can't imagine that it sucks any less just because you also happen to be a cheater. I get that now, too. It makes sense.

Additionally, it's possible that Annalise isn't angry with Sam just because he slept with someone else, but also because he can't stop lying to her about it (see: the shocking pregnancy reveal). She's tricky, that Annalise. She hates it when people don't tell her the truth, but she has no problem breaking the law when it suits her (planting Lila's cell phone in Griffin O'Reilly's car, for example). She's full of contradictions — I suppose that's part of what makes her such a fascinating character.

Now, does Sam know about Annalise fooling around with Nate? I don't think so. If he did, I suspect that he would've thrown it in her face by now. In the preview for Thursday's new episode, "Kill Me, Kill Me, Kill Me" (in which Sam's killer will finally be revealed!), Annalise and Sam appear to get into some sort of physical altercation. Uh oh. Is it because Sam finds out about Annalise's affair and lashes out at her in retaliation for the way she made him feel about his relationship with Lila, and in the ensuing struggle, ends up getting whacked in the head with the trophy? I don't know. At this point, I'd say anything's possible.