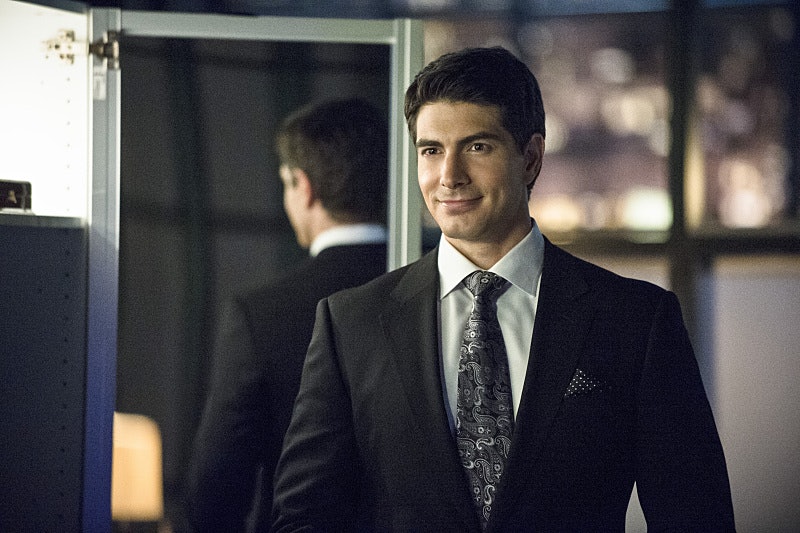 I'm not ashamed to admit this, Arrow fans. I like Ray Palmer. Now, I know he stole Oliver's company; I know he poached Felicity; and I know all you Olicity fans will kill me for this, but I actually wouldn't mind Ray and Felicity getting together for a little while (you can all come after me on Twitter later). Ray is also capable of a lot of good. His plans to rebrand and relaunch Starling City are noble; he's smart, he's friendly, and he is easy on the eyes (which is really just a bonus). But most importantly, he will one day become the superhero The Atom. But as much as I like the billionaire now, will Ray Palmer become The Atom on Arrow or is he not destined to get his superpowers on The CW series? It might happen sooner than we think, but it might not happen on Arrow, which would make perfect sense with the character from the comics.

While this could mean nothing (though I highly doubt that's the case), Brandon Routh (aka former Superman now Ray Palmer) recently tweeted a photo of himself in the Arrow makeup chair getting a plaster cast of his head and neck. Could he be doing this for Atom-related purposes? You never know with billionaires, but I honestly can't imagine why Ray Palmer, the non-Atom version, would need a plaster cast of his upper body.

Routh has also teased his Atom status a few other times on social media, like one tweet that stated he would be "working as Ray Palmer this week" but on Arrow. As many of you probably already know, The Atom from DC Comics is a man who is able to shrink and enlarge himself without risk of exploding. Ray Palmer discovers this ability within his own body after he uses a lens he created to try and shrink himself to get himself and his girlfriend out of a cave after a spelunking adventure gone wrong. Palmer realizes he doesn't actually need the lens as it is something inside of him that allows him to manifest the ability. He eventually uses this power to become a superhero.

Palmer normally appears in group stories with The Flash more often than with the Green Arrow, so it's always been interesting to see that Palmer appeared on Arrow rather than its newer superhero series counterpart with Barry Allen.

From Routh's social media activity and with The Flash vs. Arrow crossover coming very soon to our televisions (Who else can't wait until December 3 & 4?), it would seem as good a time as any for Ray Palmer to also discover his powers, or at least to invent the lens that allows shrinking and enlarging to occur. Perhaps in one of the crossover episodes, we could see Palmer using the lens and seeing how the shift makes objects explode thanks to the change in the object's molecular structure. OR to really stick with The Flash's theme of ending every episode with a small teaser scene, perhaps Palmer could start his shift.

I'm not sure about your guys, but after what is sure to be an epic few episodes with that crossover, it'll be hard for The Flash and Arrow to top themselves. But a scene like this, with Palmer, would definitely have fans begging for more.