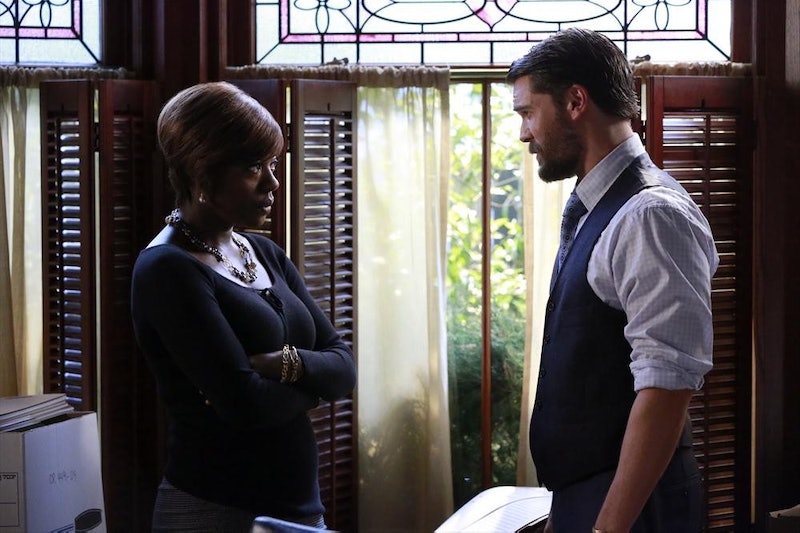 This Thursday night isn't your typical Shonda Rhimes night. It's a very special evening, because we will finally learn who killed Annalise's husband Sam Keating on How to Get Away With Murder and while I don't think Frank killed Sam, I do think he's in trouble.

Since Episode 1, viewers have been "patiently" waiting to find out who murdered Annalise's cheating, lying husband. Is it Rebecca? What about Bonnie? Maybe it's his very own wife. So many theories are going around, and I'm convinced it could be anyone,except for a select few. HTGAWM's Katie Findlay (aka Rebecca) revealed to TVGuide.com that Sam's killer will be unmasked mid-episode. We only have to wait until the halfway point and not the end? Now, that's what I'm talking about.

Findlay also says it's not so much as "the who" we should be worried about, but rather the "how." As she told the entertainment website, "I think what shocked a lot of us about the way things played out was the actual nuts and bolts of it. What ends up happening is very different than what people are thinking. The actual process of how Sam ends up where he ends is messy and it takes a lot more than one person making weird calls. It's complex. I'm telling you, really and truly, the process freaked me out. It made me sick to my stomach. It'll freak you out. My hands were shaking a little bit for a couple days. It's pretty intense."

OK. Now I'm even more curious. It needs to be Thursday at 10 p.m., stat. Findlay also wants fans to know that Sam's death is on purpose, and is not an accident. She says, "It's not just a mistake."

Apparently, "a lot is involved" regarding his death. Per Findlay, "I had to read it a couple times before I figured it out and how people were implicated." Speaking of people being "implicated," one of those people just might be Frank. Now, I don't believe Frank killed Sam, but he could easily be blamed for his death. I have a few theories running through my mind as to why Frank's an easy target when it comes to pointing the finger:

Does He Have a Solid Alibi?

After Laurel storms away from Frank and his girlfriend Sasha, she meets Connor and Wes, but does Frank stay at his place? Can Sasha vouch for his whereabouts? If she leaves, then he's all alone in his apartment, which makes for a poor alibi. When the murder and burning of Sam's body is complete, Laurel ends up back at Frank's apartment, where he is waiting for her, but we still don't know if he was there all night. As far as we know, his time in between is unaccounted for. If he has a weak alibi, then Frank could take the fall.

Frank is in possession of the murder weapon! It's as simple as that. If Laurel tells him everything that happened, then he'd be smart not to get caught returning the statue (or return the statue at all, but you know he totally will) and to not leave any fingerprints. However, if she keeps him in the dark, then he might not be as cautious. However, when Laurel arrives at Frank's apartment with worry and dirt all over her face, I think he knows this is a serious matter. Whether he does or doesn't learn the truth, Frank might even take the fall for Laurel. Have you seen how he looks at her? Yeah, he has a major jones for her.

He Has a Bad Rap With Annalise's Boyfriend

Annalise's ex-boyfriend, Nate, who's also a former cop, knows Frank planted Lila's phone in Griffin's car. Frank is not afraid to do Annalise's dirty work, so maybe Nate assumes Frank killed Sam for his boss/friend? Also, what if Frank's fingerprints are on the murder weapon? If somehow this all magically comes to light, Nate could easily put two and two together. Bam! Frank is blamed for Sam's death.

I guess Frank should've listened to Bonnie and stayed away from the students.