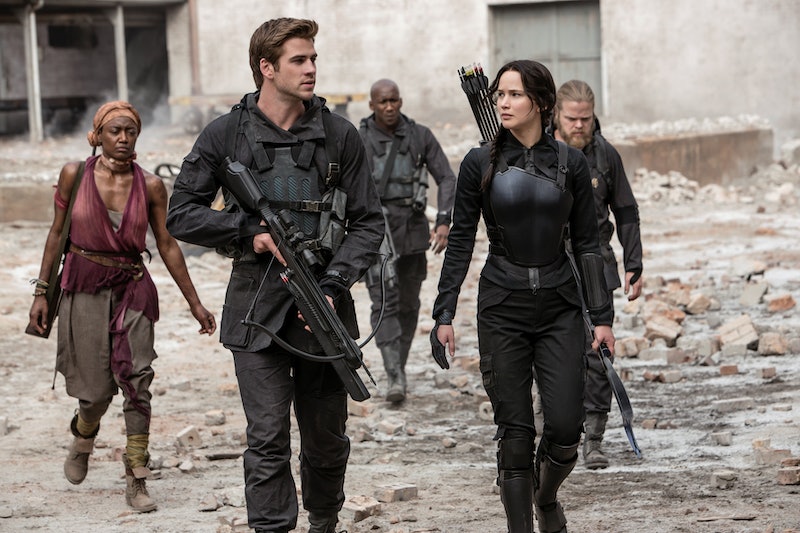 Of all the recent movie trends, the decision to stretch the last book in any series across two movies is a head-scratching one. It worked for Harry Potter — the Deathly Hallows book was long enough to support two movies. It made less sense for Twilight, which didn't need two films for Breaking Dawn, yet doubled down anyway. And it was truly puzzling when it was announced that the final installment of The Hunger Games would be split into two movies. There isn't really a natural dividing point in the story. So, where does Mockingjay, Part 1 end, and what's left for Mockingjay, Part 2 ?

I am here to satisfy the curiosities of those of you who can't wait to see the movie for yourselves. But first, the requisite warnings: This post is basically nothing but spoilers. It gives away huge plot details for both Mockingjay, Part 1 and Mockingjay, Part 2. It also ruins the books if you haven't read them yet. (And, if you haven't — what's wrong with you?)

It's also helpful to remember where Catching Fire ended. Refreshed? Good. Now I can tell you — and I'm really, really serious about the spoiler warning here — where Mockingjay, Part 1 ends: The movie stops shortly after Peeta's rescue.

So, what do we have to look forward to in Mockingjay, Part 2? In my opinion, the best moments are still ahead of us. They include:

The action sequences in Mockingjay, Part 1? Mere skirmishes. Sure, Katniss witnesses the bombing of a hospital in District 8, but it's not really an action sequence. Even Peeta's extraction is a little sedate, since the Capitol wants Peeta to return to District 13 so he can try to kill Katniss. We still have the battle at District 2 coming up, and, of course, all of the fighting at the Capitol.

Almost everyone in The Hunger Games are motivated by loss in one form or another but, in Mockingjay, Part 1, most of the major characters pull through unscathed. Well, maybe not totally unscathed — there are those nasty hijackings — but at least alive. That means there are going to be some big character deaths ahead. Real big. Bring the tissues.

In the book, Katniss agrees to become the Mockingjay symbol only if President Coin agrees to some of her requests. This includes letting Katniss be the one to kill President Snow after he's captured. In the movie, somehow this item is no longer on her list of demands. Whether or not that hints at bigger changes down the road remains to be seen.

At this point, Katniss knows that the rebels of District 13 are using her, but they're using her for a cause she agrees with. She hasn't yet hit peak suspicion about President Coin, and there's not really any hint that Katniss thinks that Coin is trying to assume power the same way President Snow did. She's just an authority figure that Katniss sometimes disagrees with. Their conflict is just getting started.

Real, or Not Real?

To me, that question was the emotional center of the whole book series. With Peeta having just returned, he didn't have a chance to ask it in the movie. Peeta's best moments? Not real... yet. We'll have to wait for Mockingjay, Part 2.