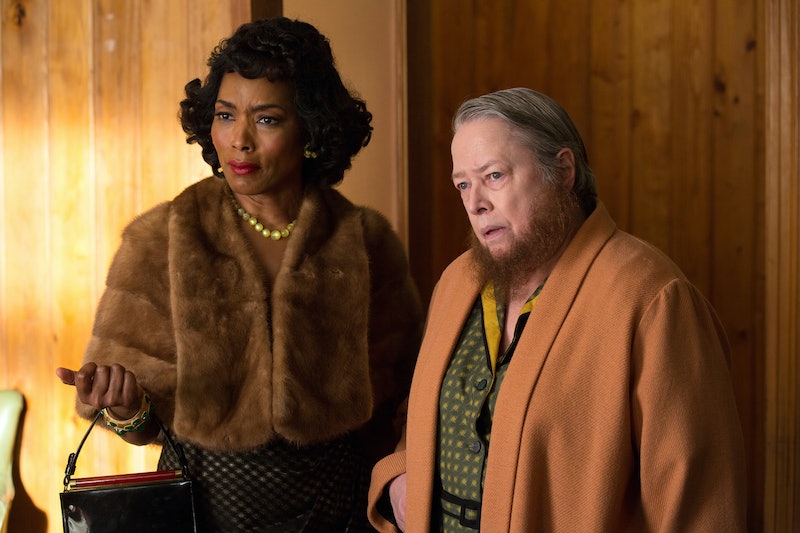 This week will mark the mid-season of American Horror Story: Freak Show and I seriously have no idea what's going on. There are so many plot holes in AHS: Freak Show and, yet, FX keeps making announcements about adding more characters. (Ryan Murphy, please stop the madness and make a coherent plot before you throw new people into the mix.) If you were to ask for a one sentence summary of the show, it would be tough, but my response would be something along the lines of: There are a bunch of nonsensical murders at Elsa Mars' freak show, a handful of murderers, and, oh, there's some crazy annoying rich kid who needs to die ASAP. That's as simple as it gets.

And while I get very pumped up for the start of every AHS season and the idea always seems like it's going to be the best show ever, in recent seasons, I start to lose enthusiasm around Episode 6. At that point, I have no idea what is happening anymore or if there’s even a storyline to follow.

Of course, in Seasons 1 & 2 the writers were able to wrap everything up and bring everything full circle — but then Coven happened. And I'm worried we have another Coven on our hands. Last season, we witnessed the most random story and at the end Taissa Farmiga's Zoe just left and it ended and I thought to myself, "Wait, is this really how AHS is ending things?" Yep. It was.

Well, in the hopes that Freak Show doesn't go the way of Coven, here are 14 questions Murphy and Co. need to answer before this season ends:

1. What was the point of Twisty?

For real though, he was a great character and was the main villain and then Edward Mordrake came and he was like, "LOL K BYE" and just left.

2. How did Paul and Elsa start hooking up?

I would love some context into their romantic, er, sexual history and how that began because it came out of no where and, of course, it was not really explained.

3. Who the hell is the candy striper?

But really though, Dot needs to lighten up a bit. She's killing the mood. To be fair though, Bette is annoying and I wouldn't want to be permanently attached to someone who thinks Dandy is the perfect dude, either.

5. Why is Dandy's mom so chill with him murdering everyone?

I'm sorry, but if my child murdered my housekeeper, I would probably send him to an asylum. I know Dandy's mom is crazy too, but how does no one in the town of Jupiter know about the seemingly singular rich family in town's seedy business?

If my mom wasn't answering the phone and she worked for the Florida answer to Norman Bates' family, I would probably be calling the cops to investigate. Just saying.

I mean, he's been talking about it for half of the season. Get on your bike and get out of there… or don't, but commit, man.

What is going on with the escort situation? Was he really into Matt Bomer or was he exactly some scheme? I am too confused about this to make a guess and if I did, I would probably be wrong.

We know it's big, but does it have a point? It it really THAT big? I have so many questions.

10. Are the townspeople cool with the "freaks" now?

The townspeople hating freaks was a huge plot point and now they are suddenly not interested in kicking them out of town. They have put down their pitchforks for now, but I find it hard to believe the town is just cool with freaks all of the sudden.

11. Why does anyone even listen to Elsa?

She can't sing (and I can't listen to another Lana Del Rey song). She's clearly crazy. She shouldn't be calling the shots. Clearly, Kathy Bates should be in charge here.

12. Is Angela Bassett going to get pregnant or something?

So she found out she is a woman and not, as she called herself, "a full-blown hermaphrodite." Awesome. Does that mean something to us? Is that going anywhere?

13. Is Emma Roberts ever going to be useful?

Seriously, kill someone or get out. I'm over the fake flashforwards where she "might be bad" when we all know she’s not.

14. Do the freaks even perform in a freak show anymore?

I am pretty sure everyone on this show is a squatter, because there have been a total of two shows in seven weeks. How do these people afford cake for Elsa's birthday party if they never work?