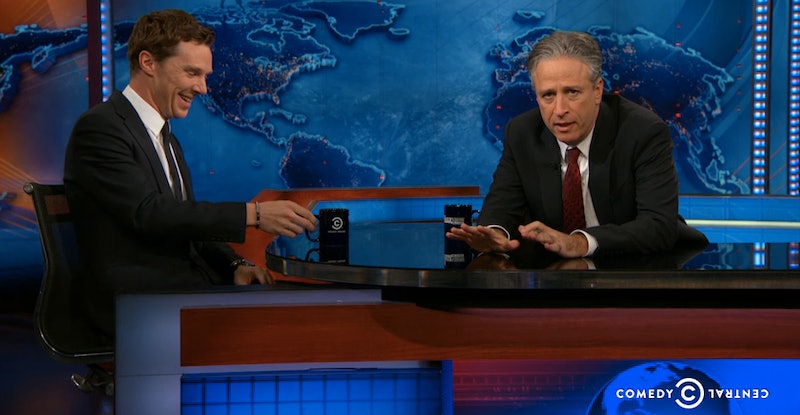 When Benedict Cumberbatch appeared on The Daily Show, Jon Stewart spoke for the people. "I want to rip your clothes off," Stewart told the charming Brit, "and sell it on eBay." OK, so maybe we all just want the former, but he gets the idea. The man does look great in a suit. Cumberbatch laughed it off in his typical charming way, and went on to explain why he was so thrilled to play "war hero" Alan Turing in The Imitation Game. And although the duo had a fantastic conversation about the film, the best parts of the interview were when Stewart swooned over Cumberbatch.

"I guess it'd be the wrong time to ask you to marry me." Stewart joked after one of Cumberbatch's long and eloquent explanations about the film. "You're a bit late," Cumberbatch replied. Yeah, we know you're happily engaged, Benedict. Don't rub it in.

The icing on the cake to Stewart's comments just about sums up what the internet feels: "I wish you were at least less talented, or I wish you would lean over and whisper, 'I have eight nipples' — something that would help me get over this cat." We're all right there with you, Jon.