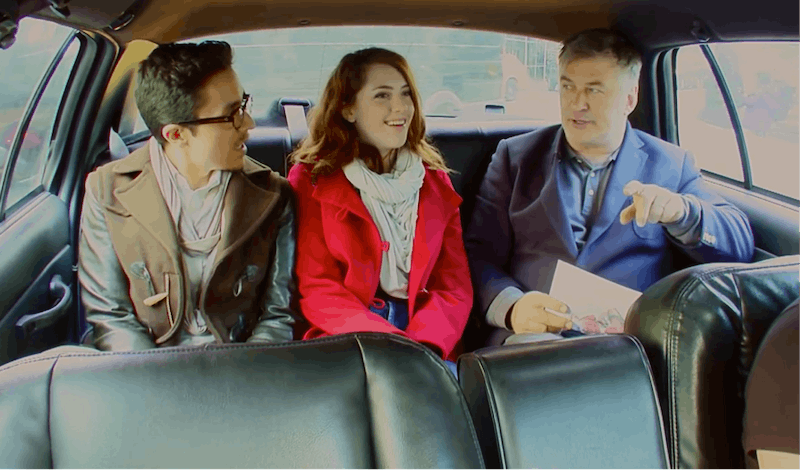 After watching Jack Donaghy repeatedly and aggressively try and break up Liz Lemon and her stud of a boyfriend played by James Marsden (aka, the literal perfect human specimen) on 30 Rock, I'm not sure how faithfully I would follow his romantic advice. But the couples featured so far on Alec Baldwin's new web series, Love Ride, seem to think he's onto something. On the series, Baldwin touts his credentials as an "internationally recognized couples therapist" (me too, Alec, me too) and lures couples into a taxi outfitted with tons of cameras where he proceeds to quiz them and ask funny questions about their relationships.

So far, the couples seem far from unsuspecting (seriously, if I got into a cab with Alec Baldwin, I'd probably start freaking out and muttering weird 30 Rock references like "INTO THE CREVASSE" until he kicked me out, but they were all pretty unfazed), and I'm not really sure if anything he says to them is exactly groundbreaking, since both couples are happily married. Still, Baldwin could probably read the phone book in a cab and I'd probably still laugh. He has quick-witted partner-in-crime Paula Pell (remember Pete Hornburger's wife?) feeding him some of the questions for maximum hilarity, and the couples so far have been good sports about getting carted around New York City while their relationships get picked apart.

As for me, I'm just reveling in an opportunity to finally see Jack Donaghy unchained; he says "fuck" twice, and both times I was near-giddy with joy. The show will release a new episode on Above Average every week, so if you happen to live in New York and also happen to look as adorable with your S.O. as these two couples did, then I would start lingering on sidewalks and telling every Baldwin-less taxi to move along.