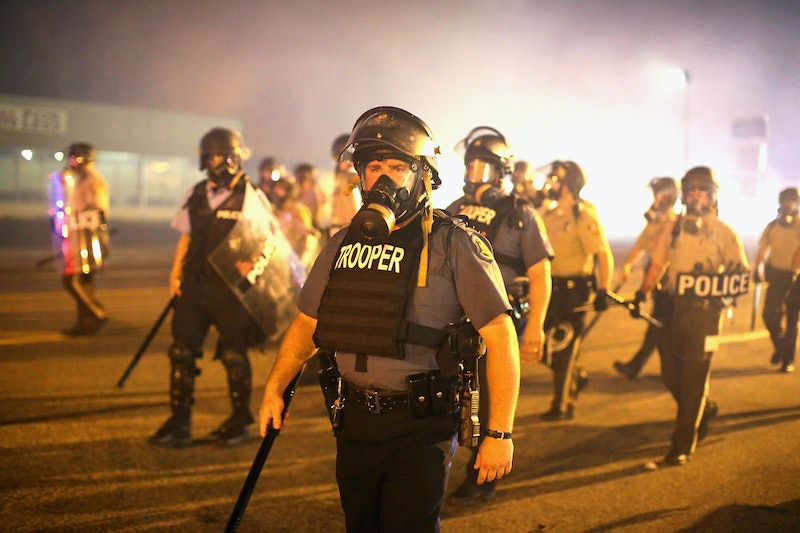 #PantsUPDontLOOT supporters now have a reason to celebrate: The grand jury in Ferguson has acquitted Darren Wilson in the Michael Brown shooting case. So what will Darren Wilson do next, now that he's been freed of any murder or manslaughter charges? Wilson, who has been on paid administrative leave from the department since the shooting in August, could go back to work, for one. However, it's a scenario that many believe is unlikely — it was rumored Friday that Wilson plans to resign — and even if he does go back to the Ferguson police department, there are still many scenarios that could play out.

Now that any criminal charges have been dropped, Wilson is legally permitted to resume his position within the Ferguson police department, but after the last few months, which have seen intense protests condemning the officer, it would be an unexpected move for him to return to work as if nothing had happened. If he does return to his post, Wilson could also be subjected to an internal investigation and receive disciplinary action from his department.

Another scenario would be a change in his job duties. Instead of returning to his position as a field officer, Wilson could be relegated to desk duties. The department could risk even more bad PR by accepting the officer back without any repercussions, even if he is acquitted, and therefore may feel forced to demote him as a statement.

Yet another scenario would be Wilson choosing to find employment in a different police department in order to try and shake the stigma that would undoubtedly follow him in Ferguson. After being dragged through a months-long legal process, Wilson may take his acquittal as a sign to start fresh somewhere completely new and far away from Ferguson, Missouri. As a divorcé, it would be fairly easy for him to pick up and go.

And yet another scenario would be for Wilson to quit the profession altogether. Perhaps he's been traumatized by the events surrounding the Brown shooting and can't even fathom going back to policing. As a free man, the options would be nearly endless for him.

The world had been waiting with bated breath for the grand jury's decision regarding officer Wilson, who fatally shot unarmed black teen Michael Brown on August 9. The jury weighed several charges for Wilson, including first-degree murder, all of which he was able to escape.