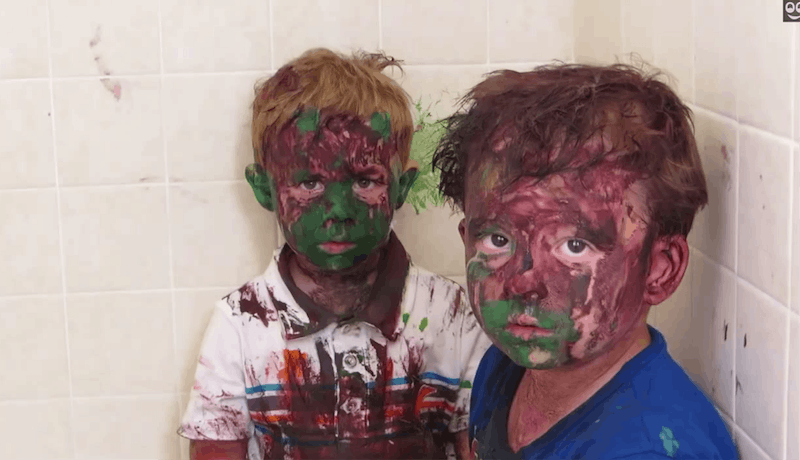 Do you ever suspect that some modern parents only have children for the sake of putting their shenanigans on the internet? I mean, I'm not judging—that's at least 57% of the reason I intend to procreate in the future. I'm assuming that that was the primary motivation of this video of a father who couldn't stop laughing at his paint-covered kids. They're sitting in the bath tub, caked from head to toe in so many different colors of paint that it looks like they just had their own toddler paint gun war, and the man who is supposed to be disciplining them is laughing his ass off (not that anyone can blame him).

I think there are some moments in life, especially with kids, when you just have to laugh for the sake of your own sanity. Kids are messy and gross and basically like clumsy, little drunk people who have no regard for the unstained things you hold most dear. If that was the state of those two boys in the tub then I'm guessing the "downstairs" he references in the video looks like what remains of a Color Run 5K route the day after the race. (Hint: not pretty.)

So yes, while it might have been a little weird for their dad to bring his camera up to film his attempt to discipline his kids, I think sometimes chronicling things as ridiculous as this is necessary to retaining what shred of humanity you have left when you face a mess as prolific as that. At least maybe now they can use the YouTube profits to pay for a new everything in their entire house. In the meantime, my not-so-secret sweet tooth is filled with sympathy for these adorable paint covered monsters, whose (more than justified) punishment was being denied juice:

More like this
The Rarest Baby Names In The U.S., According To The Most Recent Data
By Mia Mercado and Emma Carey
Meet The Disney Imagineer Bringing 'Guardians Of The Galaxy' To Epcot
By Charlie Mock
8 TikTok Pasta Recipes To Try Out At Home
By Emma Garza
The True Meaning Behind Each Hand Emoji
By Bustle Editors and Emma Carey
Get Even More From Bustle — Sign Up For The Newsletter