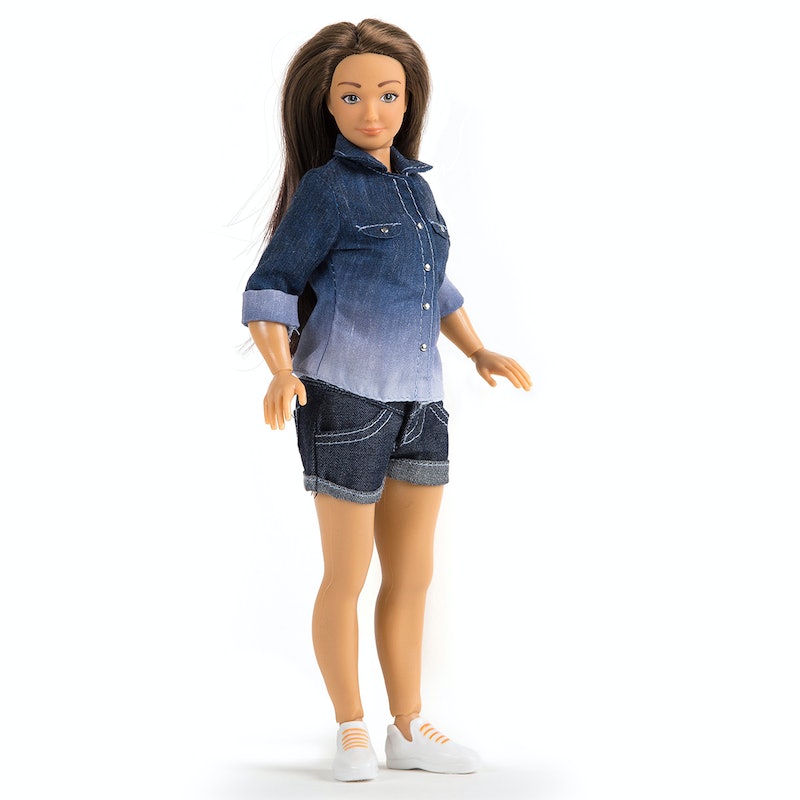 If you've been on the Internet today, you've probably stumbled across something about Lammily, the "normal Barbie" that has more realistic height-weight proportions than actual Barbie, and even comes with stickers that could give her acne, moles, freckles, bumps and bruises, tattoos, and even dirt stains. The news media went crazy with praise for Lammily's more realistic dimensions, even advocating that we "distribute them to little girls everywhere."

But I'm here to say that we shouldn't do that, because Lammily isn't that revolutionary. The glaring problem with calling her "normal" and saying that she resembles "actual humans" is the same problem as saying those things about Barbie because. Lammily is white with long brown hair, and though the precise measurements and acne stickers make her different from actual Barbie, she still has a petite figure and fit body. So what exactly are we celebrating here? Another doll with white skin, caucasian features, over-sized lips, and a flat stomach? The vague sense of diversity that comes from making a doll with bendable wrists?

Don't get me wrong here, there is an urgent need for dolls and action figures with realistic proportions and bodies that have all some of the nuances our bodies do. But it's important to note that the creator, Nickolay Lamm, used CDC statistics with a sample size of only 118 people to find the measurements for his doll, which is not even close to being representative of the entire population and therefore completely undeserving of being called "average" or "normal." It's also important to note that even within those 118 people used to find a mean for all 19-year-olds, there would be significant variation in the amount of fat visible on their bodies, the length or their legs and torsos, width of their arms, shape of their waist, etc. But "normal barbie" only pitches one of those heights, weights, and limb proportions to be average. This is a problem.

On top of all this body dubiousness is Lammily's wardrobe. She pretty much sports one kind of preppy, middle class look. There's an outfit for Exploring Rio, Rocking London, and a Barcelona Night Out. I'm sorry, but most 19-year-olds aren't really experiencing such privileged adventures in globe-trotting. How about an outfit for "trying to figure out how to be a grown-up and function" or "there is a Broad City re-run on and I'm never leaving this room" ?

I object to the use of words like "average" and "normal" because newsflash: there's absolutely no such thing. By using that language, Lamm and news media outlets are suggesting that there is, and therefore perpetuating that it is something to strive for. In this case, "normal" and "average" means all the things I've discussed: white, fit, and wealthy — and turns out there is a large population of people who aren't those things. I don't think making a doll who fits these normative aesthetics and happens to come with add-ons designed to make it look like she has mosquito bites on her skin is doing much for anyone.

More like this
The Best Underwear For Sensitive Skin, According To A Dermatologist
By Alexa Vazquez
TikTokers With Eczema Are Opening Up About Topical Steroid Withdrawal
By Kui Mwai
Yes, You Can Buy Off-White’s New Beauty Range In The UK
By Tomi Otekunrin
Glossier’s New Olivia Rodrigo Campaign Is Giving ‘90s Groovy Chick
By Tomi Otekunrin
Get Even More From Bustle — Sign Up For The Newsletter