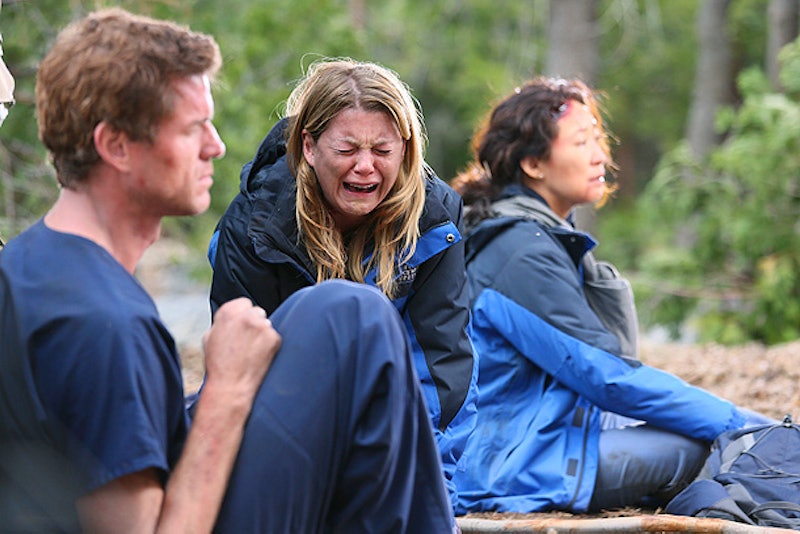 For a series that's been on the air for 11 seasons and counting, Grey's Anatomy isn't exactly worse for wear. Sure, it's not quite as good as it was during its mid-'00s, Emmy-winning prime, but it's still a whole lot better than most other shows on network TV. Just take a look at Meredith's realistic, emotional growth these past few seasons, for instance, or how well the show handled Cristina's departure last May; while other series lose steam year after year, Grey's momentum just keeps growing, and it's no wonder ABC plans on keeping it on the air until Shonda Rhimes says otherwise.

Yet 11 years is a long time, and while Grey's may have a reservoir of smart dialogue and complex characters, there is one area in which it's starting to wear thin: plots. More specifically: disasters. Over the course of the show, Grey's has featured everything from bomb threats to ferry crashes, and while the current season hasn't yet seen anything too major, you know it's bound to happen in a few episodes time. So, Grey's writers, before you start wracking your brains for how to make a second mass shooting feel realistic, here are a few catastrophes the show hasn't yet covered:

Here's my theory: a massive blizzard will come to Grey's, right when the doctors are all getting ready for work in Meredith's house. Suddenly, Meredith, Derek, Alex, Jo, Callie and Arizona are all trapped in the house together, unable to leave, surrounded by alcohol, and forced to confront the awkward, we've-all-slept-together-and-some-of-us-aren't-speaking feelings that rose in last week's episode. Deeply uncomfortable, drunken hilarity will ensue. It will be great.

In 2013, a rumor circulated that a March episode was going to feature an earthquake, which would leave two victims with major injuries to have their surgeries performed at the hospital. Fans freaked out, and Rhimes took to Twitter to dispel the claim, saying that the show had "no earthquakes planned." And when another fan pointed out that "earthquakes are rarely 'planned,'" she responded with this:

If a Grey's earthquake does happen eventually, though, my guess is that it'll involve a pregnant April and some fallen, unfortunately-located hospital equipment.

No tornados have yet made their way to Grey's Seattle, and that's probably because Washington rarely gets such a storm in real life. Still, it totally could happen, and if it does, it'll probably bring the hospital everything from power outages to ripped-off rooftops.

Yes, Grey's has technically covered kidnapping before, when a patient came into the hospital who'd been abducted from her parents and held hostage for 12 years. But it hasn't covered the kidnapping of someone viewers know, which would be a whole different ballgame. Perhaps Zola or baby Bailey gets abducted for an episode or two? I know I sound sadistic, but come on, you know that'd make for good TV.

Grey-Sloan Memorial has seen little fires: patients who were victims, patients who had burns, even patients who caught on fire during surgery (yes, this happened). But a big, taking-over-the-hospital fire? It hasn't happened — but that's not to say it never will. A great season-ender would be a massive fire started by a crazed patient or clumsy doctor (let's be real — it'd be Edwards) that would tear through the hospital, causing major damage and potentially the grave injury/death of one of our beloved doctors. Would it be horrible and tragic? Yup. Shocking and compelling? Oh, yes. Grey's writers, get to work.

More like this
The 'Teen Wolf' Creator Revealed If 'Wolf Pack' Takes Place In The Same Universe
By Grace Wehniainen
'Succession' Season 4 Will Be An "Absolute Banger" According To Cousin Greg
By Bustle Staff
The 'Gossip Girl' Reboot Creator Is “Looking For A New Home” To Air A Potential Season 3
By Brad Witter
All The ’70s Easter Eggs You Missed In 'That ’90s Show'
By Grace Wehniainen
Get Even More From Bustle — Sign Up For The Newsletter
From hair trends to relationship advice, our daily newsletter has everything you need to sound like a person who’s on TikTok, even if you aren’t.