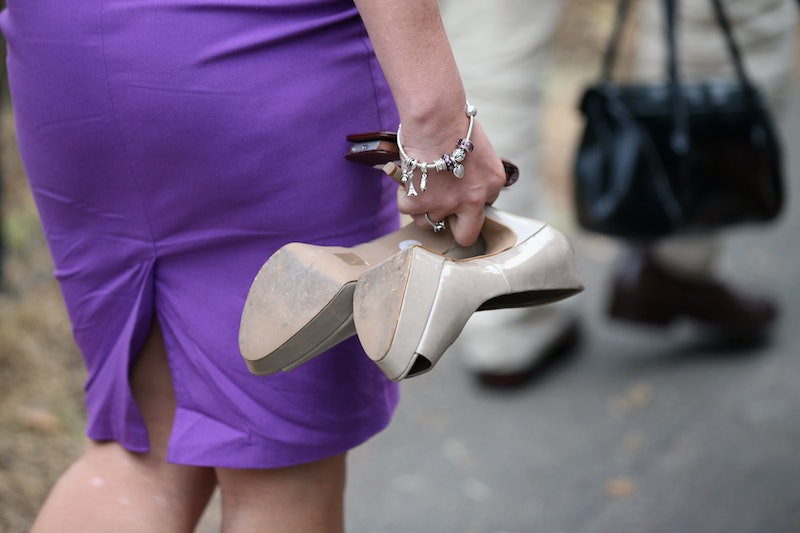 For most people, high heels aren't exactly everyday footwear. Those girls who wore heels to their 8 a.m. classes every day in college deserve major props, especially when most of us could barely restrain the urge to wear leggings as pants every day. While heels can cause a whole range of health problems, a recent study found a questionably good effect of wearing them, aside from feeling like Beyonce: men are more likely to help a woman wearing heels. I guess chivalry isn't dead as long as you're conforming to traditional fashion standards?In the study, conducted at the Université de Bretagne-Sud in France, a woman asked people to complete a survey, both in flats and high heels. At one point during the interaction, she also dropped a glove. The researchers found that, as the height of the heel increased, so did the willingness of men to do the survey and pick up her glove for her. However, heel height didn't affect other women's willingness to help at all, Science Daily reports. The researchers performed a third experiment as well, which found that men were more likely to start a conversation with a woman wearing heels than a woman in flat shoes. Much like Steve Harvey from Family Feud , I'm not surprised. I'm just disappointed.

The lead researcher behind the study, Nicolas Guéguen, speculated that this was due to men associating high heels with "sexual intent" in women. So basically if you wear high heels, men are more likely to help out because they think you'll be interested in them. More research needs to be done on the subject to pinpoint the exact reasons behind the results — in my opinion it also gets into women in high heels being perceived as more feminine, and therefore more helpless. Plus, you know, high heels kind of make it hard to do anything that requires physical activity anyway. Amazing as they look, those kick-ass assassins on TV strangling men with their fashionably-clad thighs are just that — on TV.This is far from the only way men judge women for their appearance, either. Attraction is a weird thing, and even something as seemingly random as wearing red can affect how a man behaves toward you. To be fair, though, women aren't exactly exempt either. There are all kinds of ways we take our behavioral cues from a person's appearance.So next time you're particularly lazy, break out those high heels from the back of your closet if you feel like it. Maybe if they're high enough you can convince a man to carry you from destination to destination for the day.