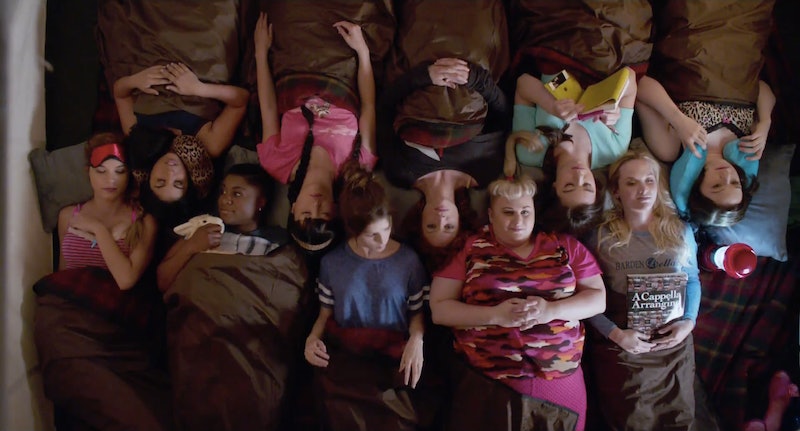 It has finally happened, you guys. We are finally one step closer to the second most anticipated film of 2015. (Fifty Shades of Grey, of course, being the first.) After doing a Vanity Fair photo shoot and releasing the world's cutest movie poster, the lovely minds behind the upcoming Pitch Perfect 2 released the official trailer. In two minutes of hysterical, well-dressed goodness, we got an overall look at exactly what we can expect from the sequel to the quote-iest film since Mean Girls. And what can we expect? Well, a lot of Barden Bella shenanigans and cameos from, like, everyone.

However, watching the trailer isn't all sunshine and puppies. A lot of it is very confusing, mainly because the many questions that have been answered about the movie have just bred brand new questions that the trailer left unanswered. Sure, they're just trying to keep us intrigued. After all, if they laid all their aca-cards on the table up front, what would be the point in going to watch the movie? However, I have to say that these questions are going to haunt me every single day until it's May 15, 2015. And I know I'm not alone. So, here are 23 questions the Pitch Perfect 2 trailer is probably going to leave you with, though they're far from the only ones.

1. Did we just get another "Cups" single?

Not that I didn't enjoy the first one, but... again?

2. Who won the pillow fight?

Right now, I don't think it was Fat Amy.

3. Is this an a capella show or a Destiny's Child music video?

I have my fingers crossed that a D3 song will be performed in this movie. Don't disappoint me.

4. Is this an a capella show or a Kanye West concert?

A Kanye West song would be good, too.

5. Why is Fat Amy winking at Thumper?

I'm more confused than Thumper is, to be honest. And kind of uncomfortable.

6. Who set random traps in the woods?

7. Would this many people in suits really show up to an a capella competition?

Would this many people show up to an a capella competition at all?

8. Isn't she going to get hurt landing in the water like that?

9. Are Chloe and Beca now best friends? And where does that leave Aubrey?

Were Chloe and Aubrey even technically best friends in Pitch Perfect? Because it's starting to look like Beca scooped her up.

I guess the better question would be why isn't Tobias Fünke everywhere?

She's smiling a lot, you guys. What a difference four years makes!

12. Where can I get that blinged out necklace?

Is there going to be a Pitch Perfect 2 shopping site? Because I need this necklace in my life.

13. Shouldn't Beca be more concerned about this than she is?

14. Why is that one girl sleeping with a book?

It's not a teddy bear.

15. Are the Barden Bellas getting ready to rumble?

Is there going to be more horizontal running? Is Beca going to spend another few hours in the slammer?

16. Where can I buy these clothes?

All of them. I want all of their outfits right now. Shut up and take my money.

17. Is this some kind of strange bonding exercise?

Of course, who says the two are mutually exclusive?

Someone could have at least thrown some couch cushions on the floor! Tsk, tsk, tsk. What terrible friends.

20. Did Emily actually slide down the stairs?

Or was watching Fat Amy do it more than enough to put her off?

21. Why are they having a campfire outside a house?

They didn't even leave the back porch...

And who are those pictures of?

More like this
Everything You Need To Know About ‘Black Panther: Wakanda Forever’
By Bustle Editors
Christian Bale Sang With Taylor Swift & His Daughter Can't Believe It
By Radhika Menon
Rita Ora Celebrates Finding Her "Fairytale" Ending With Taika Waititi
By Sophie McEvoy and Catharina Cheung
Dan Levy Appears In The Latest Teaser For The Weeknd's HBO Series, 'The Idol'
By Jake Viswanath
Get Even More From Bustle — Sign Up For The Newsletter