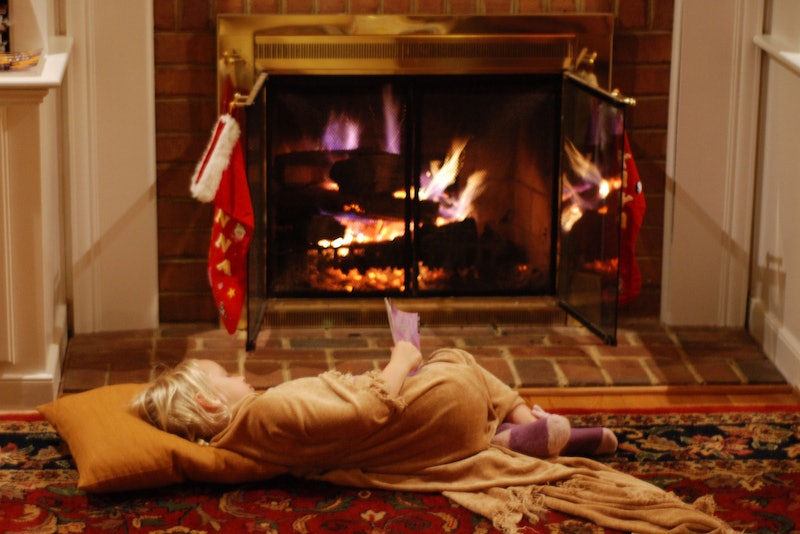 When the weather outside gets frightful, it's the best time of year to cozy up by the fire under a blanket and read some great new books. And young adult authors hear you on this. They're doing their part by releasing some killer titles just in time for holiday break. So when you're in the holly jolly giving spirit, don't forget about treating yourself. There’s a little something for everyone this month, too.

If you love a good science fiction romance, December is the month for you to swoon in the stars or in parallel universes. And if you want reality, go back to high school for first love — and first lust. And four of your favorite high school girls are finalizing a 16-novel mystery. If romance isn’t your cup of hot cocoa, you can also follow characters on a wild adventure around the globe, to the diamond mines in Zimbabwe, to an old English country manor, or just to the break room in a grocery store.

There will be no shortage of egg nog and throw blankets this holiday season, and it just so happens those two things are the perfect reading companions. And if you’re lucky enough to have a fireplace, first of all, I’m jealous of you, and second of all, pull up your favorite reading chair, relax, and dig your way through your TBR pile. Christmas carols in the background aren’t necessary, but encouraged.

Diamond Boy is set during President Robert Mugabe's brutal regime in Zimbabwe, a former African revolutionary hero that reigned with terror and was known ethnic cleansing in his country. Patson Moyo, a 15-year-old, and his family, however, arrive at the diamond mines in Zimbabwe hoping to find a stone that can make him rich and seal his future. But when the soldiers arrive, everything changes. Williams' story is horrific and harrowing, but it's also heartfelt and hopeful — particularly for modern Zimbabwe and its people.

I probably don't even have to tell you that Shepard's final Pretty Little Liars novel is set to release early December, so you can finally turn those pages as fast as you can to find out who the Big "A" is and what will happen to Aria, Hanna, Spenser, and Emily. I won't give too much back story on plot in case you're rushing through the other books to catch up, but of course all devoted PLL fans are going to need this book.

Sisterly bonding! Alison Cherry's For Real tells the story of two sisters who join an Amazing Race-style reality show where they race around the world. But when a romantic twist to the show wraps up younger sister Claire, she is confused trying to figure out what is for real and what is just for TV ratings. For a little escapism over the holidays, For Real is totally perfect — it's filled with hilarious characters, wild adventures, and just the right amount of heart.

Chances are you're probably having a better Christmas Eve than Chloe. The main character in Top Ten Clues You're Clueless has to work at the Whole Foods-esque GoodFoods the night before Christmas, and she gets stuck there after close when some prize money goes missing and the police are called. Chloe and her five coworkers are trapped in the break room trying to clear their name, and readers are certainly having a whole lot more fun reading than Chloe is living it.

Take note: Suspicion is said to be like if Alfred Hitchcock directed Downton Abbey. You've probably already checked to see if it's available for pre-order (it is), but there's more. The last words Imogen's late father said to her was, "There's something in the maze." When her parents die, Imogen is left to run the family's English country estate, and she finds that there's more than one secret hiding in the manor. In a loose Rebecca retelling, Suspicion is action-packed and thrilling, and you'll be flipping through those pages like your life depends on it.

Finally, finally there is a sequel to 2008's awesome King Dork. King Dork, Approximately brings back the titular character, aka Tom Henderson, and it has all the rock music and teenage social critique you loved from the first — with probably even more angst. It's sarcastic and funny, but it's also super smart and insightful about the lives of teenagers. And who can say enough about Tom himself?

Add Now That You're Here to your running list of books to read if you love Orphan Black or Fringe. Nichols' part-science fiction, part-romance, and it's heavy on the science in a good way. It embeds science fact in with the fiction to make the whole story feel real and exciting — and when you're talking parallel universes, that's no small feat. And the star of Now That You're Here gets to be Eevee, a class science geek, who isn't an outcast for her smarts and never falls into a stereotype.

I'm the first to admit that I wasn't the hugest fan of These Broken Stars , the first book in the Starbound trilogy. But I know that Kaufman and Spooner can build some great characters and totally swoony romance, so I wanted to give the series another chance. This Shattered World tells another romance in the These Broken Stars universe, leaving behind the characters from the original. This time, we follow Jubilee Chase and Flynn Cormac, a soldier and a rebel, who are destined to be enemies. But in the tradition of Romeo and Juliet, it doesn't exactly go that way.

9. Love and Other Theories by Alexis Bass (HarperTeen; Dec 30)

Love and Other Theories isn't every other high school love story — or maybe it's just that it is like the high school relationships you remember that makes it stand out. Bass' debut novel is aching, and it perfectly captures not just first love, but first lust — which feels like more common in the high school experience anyhow. The novel is honest about the pains people take to protect their hearts, and the repercussions that can have.