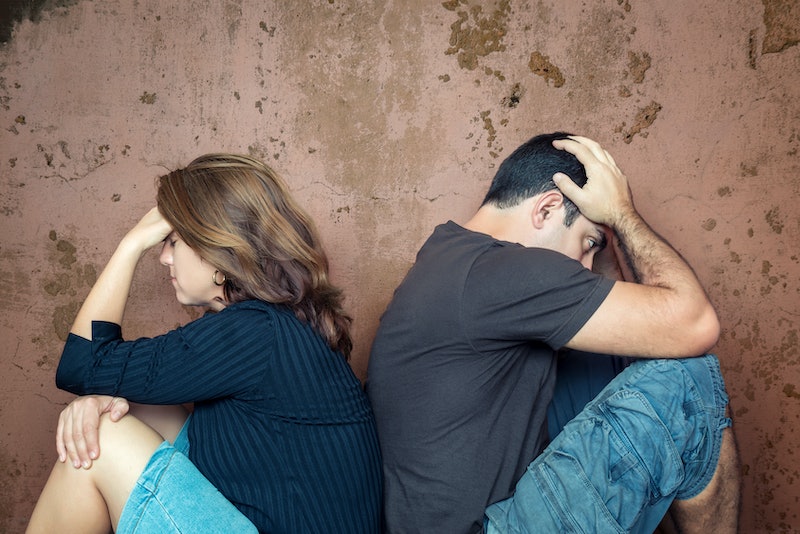 There’s an age-old stereotype about divorcees that typically paints women as the forgotten, too-old-to-move on, financially unstable loser in the deal. And while there may have been a sliver of truth to this back in the stone ages when women were left to Swiffer the cave while their husbands went off to do all of the important man-stuff, it’s certainly not the case for 21st century women, as is evidenced by a new report that divorces make women happier than men. The Telegraph’s Lucy Cavendish asks, “From a woman’s point of view, I know how tough separation is, but what about men? How do they handle divorce? What is their story?”

Interviewing a handful of divorced men, Cavendish found that their troubles — be they financial, romantic, or career-based — are as riddled with strife as some of their former female partners in matrimony. She also reached out to divorce attorney Sian Blore, who claims in 90 percent of her cases, men already have someone in waiting. But for their ex-wives, the situation may open doors for a new and happier quality of life.

For women, she says, it’s different. “They have the ‘grass is greener’ syndrome. They leave because they are unhappy and they can’t bear it any longer, not because they’ve lined up a rosy new future.”

But for all the men I have talked to the same issues come up: a sense of loss, feeling somehow undermined, absolute sadness at the way they have lost touch with their children, anger, fury even, at the way they feel treated by the courts, a conviction that somehow, they have “lost out”.

Cavendish’s report is also strongly supported by a study published in 2005 by The Guardian that suggests women are better off post-separation. In a survey of 3,515 divorced adults, researchers found that lower percentages of women were devastated after they’d called it quits, and higher percentages of women reported feeling “liberated” by the split. And while women were more likely to spend time with their friends, men were more likely to engage in destructive behaviors such as turning to alcohol. And two years after the divorce, researchers found that 41 percent of men reported still being upset about cutting ties with their ex, while only 33 percent of women reported the same.

So to all single ladies, get out there and let the bitterness fester elsewhere.