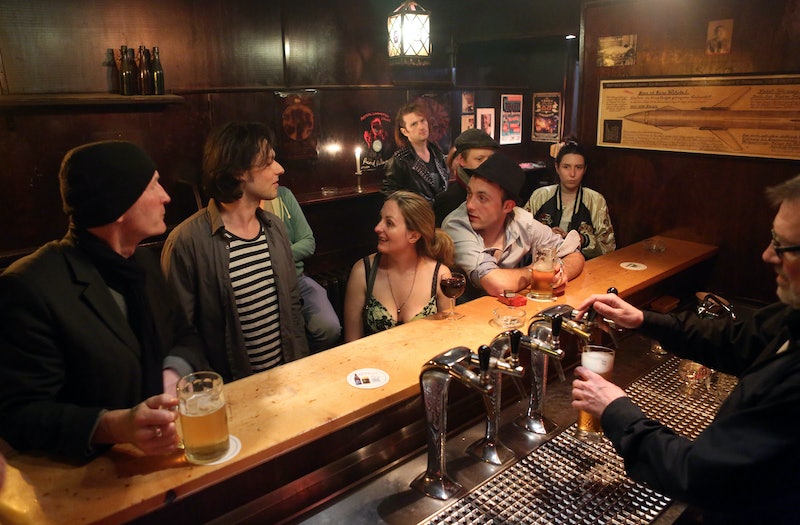 It turns out some of the side-effects of having lots of male friends are not what you'd expect. According to a new study, women who have more male friends have more sex. And no, it's not because they're hooking up with their friends; in fact, it's actually the opposite.

Based on a paper published in Journal of Comparative Psychology, it seems that men who perceive their female partners as being attractive to other people are likely to try to have more sex with their partner if there are lots of men in her life. Basically, whether men know it consciously or not, they tend to perceive other men in their partner's life as sexual threats. Because somewhere in the deep recesses of our brains, apparently there's still a little caveman in all of us.

In evolutionary terms, this response is known as "sperm competition" and it's seen in other parts of the animal kingdom as well. Males who think of themselves as having more sexual competition will be driven to try harder to inseminate females of the species, having more sex to give themselves a better chance at having offspring. From an evolutionary perspective, it makes sense. From the perspective of modern dating where birth control is a thing and the goal of our existence is no longer procreation...it seems a little silly.

This study focused only on heterosexual couples. You might assume this trend doesn't really apply for women in relationships with other women — women can't really engage in sperm competition, after all — but I imagine that a gay woman having lots of female friends could make her more sexually attractive to her mate. And it might be interesting to see if the same mechanism still holds true for men in relationships with other men. My hunch would be to say yes — evolutionary mechanisms tend to stay in place no matter your personal circumstances — but it would make for some interesting insight.

The co-author of the study, Todd K. Shackelford, feels that this might also provide some insight into sexual violence in romantic relationships. Previous studies, including one by Shackelford in 2005, have indicated that men are more likely to be sexually coercive towards their female partners when they perceive those partners as possibly being unfaithful. And the findings of this study show that evolution has, on some level, primed men to treat all men in their partner's life as sexual rivals, which implies potential infidelity. And the implications of that thought process are pretty disturbing.

Overall, I'd say this is yet another sign that we need to teach men the importance of respecting women early in life. Sending boys the message that "boys will be boys" — that giving into some of their more controlling, disrespectful impulses is not only accepted but expected — just allows this type of behavior to reign unchecked. And even though evolution might seem silly, those kind of side effects aren't silly at all.

More like this
7 Women Share Their Best Orgasm Stories
By Lexi Inks
We’ve All Had Bad Sex. Nona Willis Aronowitz Is Talking About It.
By Sophia Benoit
The Best Time To Date After A Breakup, According To Experts
By Bustle Editors
Is It Bad That I'm Not Interested In Sex Or Dating Right Now?
By Sophia Benoit
Get Even More From Bustle — Sign Up For The Newsletter