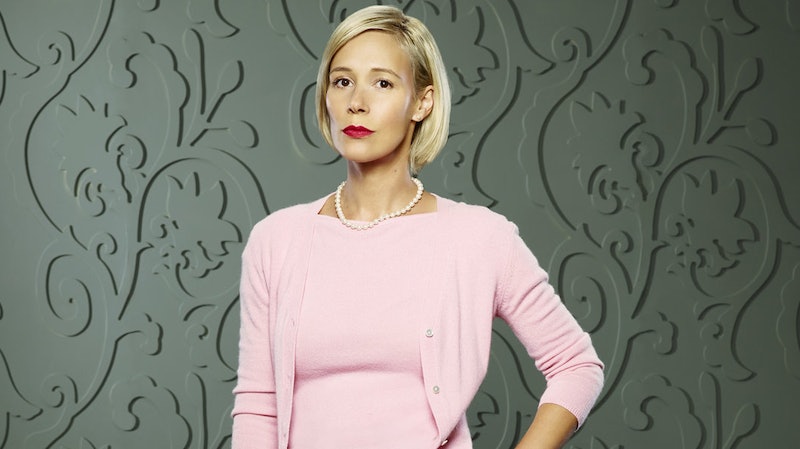 Warning: Spoilers ahead! On Thursday night, ABC's new hit drama series, How to Get Away With Murder , aired its winter finale, "Kill Me, Kill Me, Kill Me," and it was an exciting hour of television, to say the least. There were sharp twists, there were surprising turns! There was even a pretty steamy sex scene between Annalise Keating and her boyfriend, Nate Lahey! Classic How to Get Away With Murder, y'all. In the wake of the episode, a lot of people are talking about the (kind of) shocking reveal that Wes Gibbins killed Annalise's husband, Sam Keating. I totally get that. But I want to talk about something a little different, something that might've flown under the radar for some viewers: the strange man whom Bonnie Winterbottom met at the hotel bar. Who is this dude? Why is he so creepy? And how is he connected to the story? I don't think that the show's writers would've introduced such a spooky character for no reason — something tells me that we'll see him again when Murder returns with new episodes on Jan. 29. Let's dive in with a few possible theories, shall we?

After being fired by Annalise, Bonnie heads to a swanky hotel bar in order to drown her sorrows in booze (though, at the end of the episode, she appears to have gotten her job back). Once there, she meets a man who kind of looks like a younger, beard-ier, much more evil Billy Crystal. This dude is trouble — I could tell instantly. Something about him is "off." I mean, just look at him!

As the two drink, a news anchor on the television above the bar is reporting that the district attorney's office is asking for DNA samples from all of the men in Lila Stanguard's life in an attempt to find the father of her unborn child. This is the brief conversation that goes down between Serial Killer Billy Crystal ("SKBC" going forward) and Bonnie:

SKBC: It's crazy, right? First, they think it's the boyfriend and the bartender, then, they think it's her secret lover. I'm just relieved I didn't know the girl — I don't want no police keeping my DNA on file.

Bonnie: You've got secrets to hide?

Uh, OK. That wasn't a completely terrifying thing to say or anything like that. Nope, not at all. Check out his face! This guy has some serious secrets to hide.

Bonnie seems wary of his response. Still, the two end up making out later on in the episode. While they're kissing, Bonnie asks SKBC, "So, you said you were in dental equipment sales?" He doesn't answer. Instead, he says, "You smell so good," and then continues to kiss her neck. Bizarre.

An undetermined amount of time passes. In Bonnie's next scene, she's seen leaving the hotel...and she's been crying.

What happened? Why was Bonnie crying? Was she just feeling emotional about losing her job? Or did something bad happen? Was she assaulted by SKBC? Wow. At this point, I can't say. Right now, the only thing we know about him is that he might be a dental equipment salesman (which sounds like a phony cover-up job, if you ask me). How might he be connected to the Lila Stanguard case?

One of my first thoughts is that SKBC was directly involved in Lila's murder somehow. What if he is the murderer? He's definitely creepy enough. He made a point of telling Bonnie, a total stranger, that he didn't know Lila — the lady doth protest too much, methinks. Maybe SKBC has been stalking Bonnie. Maybe he knows that she works with Annalise. Maybe he killed Lila and thinks that Annalise and company know too much about the case. What if Sam hired SKBC to kill Lila in order to prevent her from telling Annalise about the affair and the baby? If that information got out, it would probably destroy his marriage and almost certainly destroy his career. SKBC could be a hit man. What if he targets Annalise next? OK, maybe I'm going a little too far here.

One of my other thoughts is that he's working with the prosecution in Rebecca Sutter's case and is trying to get some dirt on Annalise from Bonnie. As we know, Annalise doesn't always operate within the confines of the law (planting Lila's phone in Griffin O'Reilly's car, for example), so perhaps the prosecution is trying to get her busted. Another idea is that SKBC is just someone who's infatuated with the Lila Stanguard case (there are probably people like that out there, right?). So, he traveled to town, followed Bonnie, and tried to get in close with her. Or, he could be a man who assaulted Bonnie after meeting her at a hotel bar — he might not be connected to Lila at all. I don't know, but I'm very interested to find out.