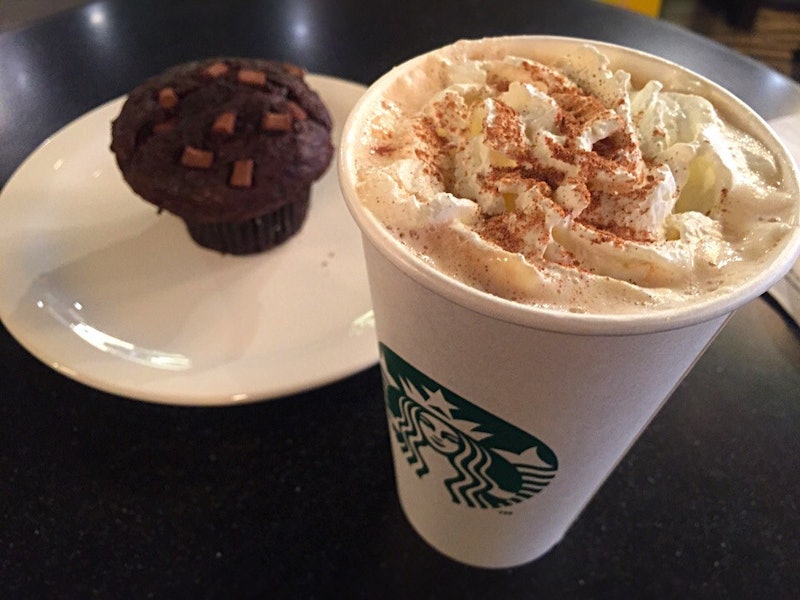 We already know that Starbucks Pumpkin Spice Lattes don’t actually have any pumpkin in them — but what do they have? Food scientist Kantha Shelke explains the science of pumpkin spice flavoring in a video for the Institute of Food Technologists, and you know what? It’s all kinds of fascinating.

It turns out John Oliver wasn’t too far off the mark when he called the pumpkin sauce used in commercial Pumpkin Spice Lattes “science goo”— but that’s not necessarily a bad thing. I mean, food is science and vice versa, so really, pretty much anything you put in your mouth that’s been grilled, sautéed, fried, baked, or otherwise cooked is “science goo.” In the case of pumpkin spice flavoring, though, there’s a little more chemistry at work than just what happens when you stick a pie in the oven. Not only that, but the recipe for the flavoring used in Pumpkin Spice Lattes changes depending on who’s making it (Starbucks, Dunkin’ Donuts, that independently-owned coffee shop down the block from your apartment you absolutely love and take all your friends to…) and where they’re making it. Generally, though, all the recipes are variations on the same theme.

Scroll down to watch the whole video — but if you’re looking for the short version, here it is in three pictures:

The mix that makes up the flavor profile of pumpkin pie is usually a combination of cinnamon, cloves or allspice, ginger, and nutmeg. It also happens to be my favorite spice combination in the history of everything.

But — as is generally the case with anything called “flavoring” — what’s actually used in things like Starbucks’ pumpkin sauce are a series of chemical compounds created synthetically in a lab. The compounds actually do occur naturally in the spices themselves; it’s just cheaper to make them synthetically than it is to extract them from the original sources.

The Difference Between Starbucks and DIY:

Interestingly, it’s actually the use of these compounds that makes us think, “Mmmm! Pumpkin pie!” whenever we drink a Pumpkin Spice Latte. If you, like me, like to mix up your own PSLs at home by raiding whatever you’ve got in your spice cabinet, what you’re actually making is something closer to chai tea (minus the tea and plus the coffee). It’s pretty damn tasty, but it doesn’t taste quite like a Starbucks PSL — and that’s why: It doesn’t have the same compounds. Those compounds only tend to come out of the spices when the pumpkin pie is actually baked; you won’t find them in ground spices shaken directly out of the jar.

Shelke goes over a lot more in the video, from what the FDA does to test each compound for safety to how chemistry affects our everyday life; watch it here, and head on over to the Institute of Food Technologists’ website for more pumpkin spice science.