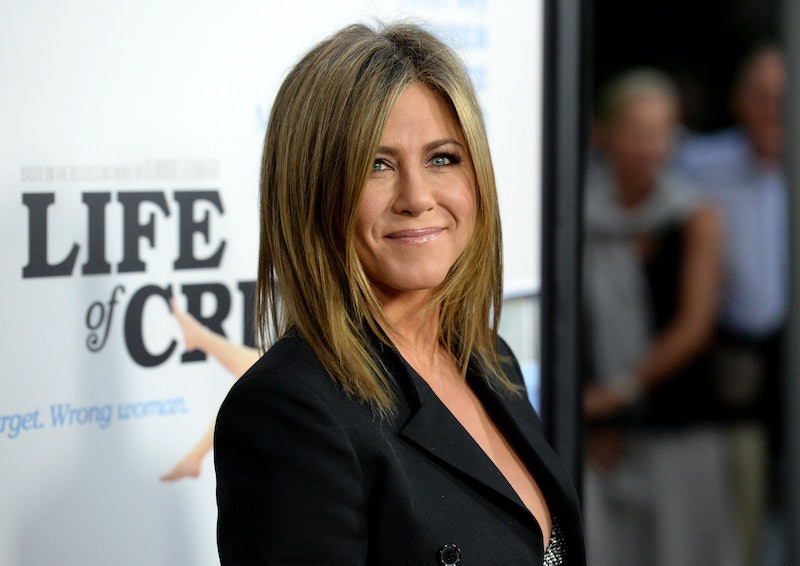 As much as I'm dying for a real Friends reunion episode, I gotta say: I really hope that if it ever does happen, they don't decide to go with this idea. In a new appearance on the UK's Graham Norton Show, Jennifer Aniston talked a bit about the legacy of Friends, including everything from her infamous "Rachel" haircut — apparently, her stylist was "stoned" when he gave that one to her — to the iconic photoshoots she and the rest of the cast did, to the possibility of a reunion. When asked by host Graham Norton (and while sitting next to Jason Bateman, who is sporting very weird hair!) whether or not she ever just wants to get the cast back together so that people will finally stop asking, Jennifer Aniston reveals her fairly dark idea for a Friends reunion:

"At this point I honestly think we should just wait until we are really much older and have Golden Friends. Then you wouldn't have the comparison," Aniston joked. Then, when Norton commented that it should just be a really "grim and depressing" reunion so "no one will ever want to see it again," Aniston added this dark, dark tidbit: "Oh no, Dead Friends!"

"It'd be a series of funerals!" Norton continued.

Look, I'd love it if Matt LeBlanc, David Schwimmer, Matthew Perry, Lisa Kudrow, Courteney Cox, and Aniston could all just finally find a time to get back together for even one photo to commemorate Friends — but seriously, if it's between no reunion and Dead Friends, I would rather just remember Friends as it was: Super '90s, and super amazing. There's already enough darkness in the world without seeing which of the Friends characters is going to perish first.

Check the interview below.