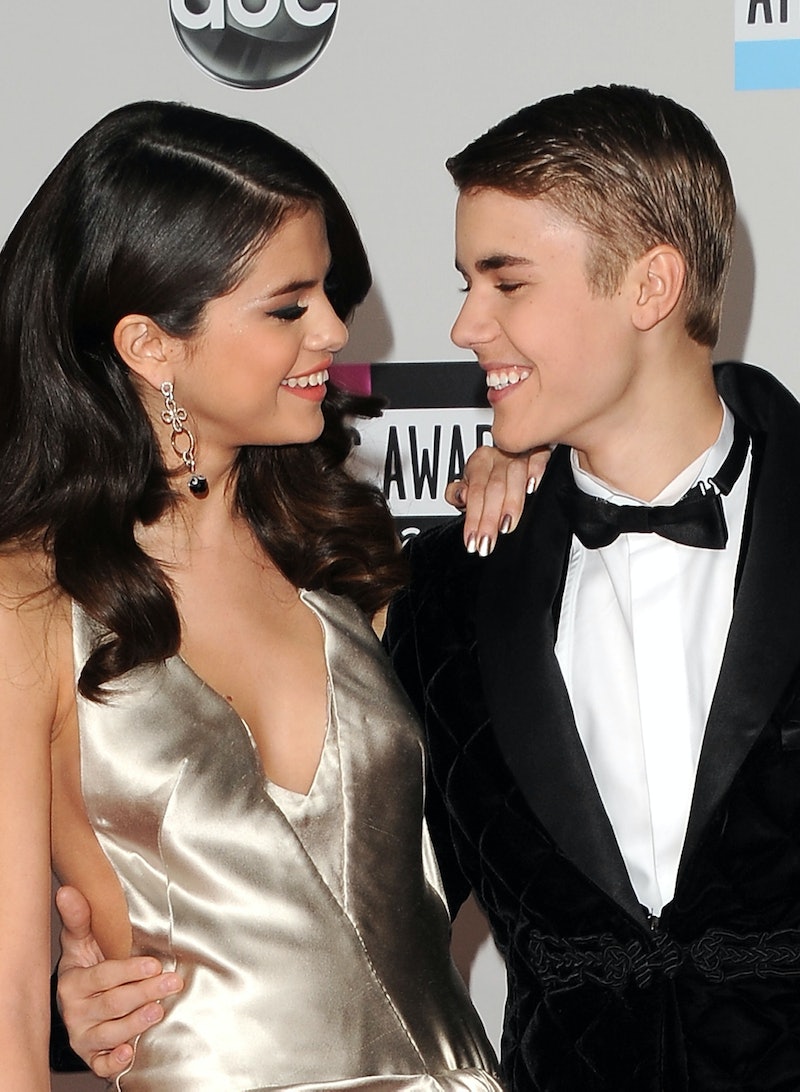 Selena Gomez made bestie Taylor Swift — and the rest of the crowd — tear up at the American Music Awards on Sunday night with her very dramatic and emotional performance of her new single, "The Heart Wants What It Wants." The song has been called the 22-year-old singer and actress' breakup anthem, inspired by on-and-off-and-on-and-off again boyfriend Justin Bieber. For those keeping track at home, the couple is currently off again and the split inspired the song, along with Gomez's tear-filled and shaky-voiced AMA performance, which was drenched in dark-cloud and tears-falling-from eyes imagery. But then, those images morphed into a strange skinny corpse body silhouette who may or may not have been her ex, Bieber.

Well, I can't say we all know for sure, but as that silhouette slowly came clearer and clearer, it kept resembling the lanky body of a certain young pop star who also happened to have dated Gomez for a long time — and it was a pretty creepy way of ending the performance. Was it a weird threat or message to the Biebs? An inside reference that only they get? Another CSI spinoff? (Oh wait, this is ABC). Or was it Biebs himself, making a cameo? Probably not, but it definitely weirded me out.

Before the performance, Gomez posted a video to her Instagram describing her goals for her performance of the song. "More than anything I’m just excited that people can, everywhere, who are feeling what I feel and feel that, will get to see that," she said. "And I want people to be able to relate to that."

I wonder if Bieber himself was able to relate — or can decipher that morgue-like silhouette. Let us know, Biebs.

More like this
Selena Gomez Is Fine Being Single, But She Still Manifested Romance On 'SNL'
By Martha Sorren, Jake Viswanath and Jack Irvin
Selena Gomez Explained Why A Past Album Cover Made Her Feel “Really Ashamed”
By Grace Wehniainen
Sadie Sink Would Escape Vecna From 'Stranger Things' With This Taylor Swift Song
By Grace Wehniainen
Taylor Swift's “Carolina” Theme For 'Where The Crawdads Sing' Soundtrack Is Here
By Jake Viswanath
Get Even More From Bustle — Sign Up For The Newsletter