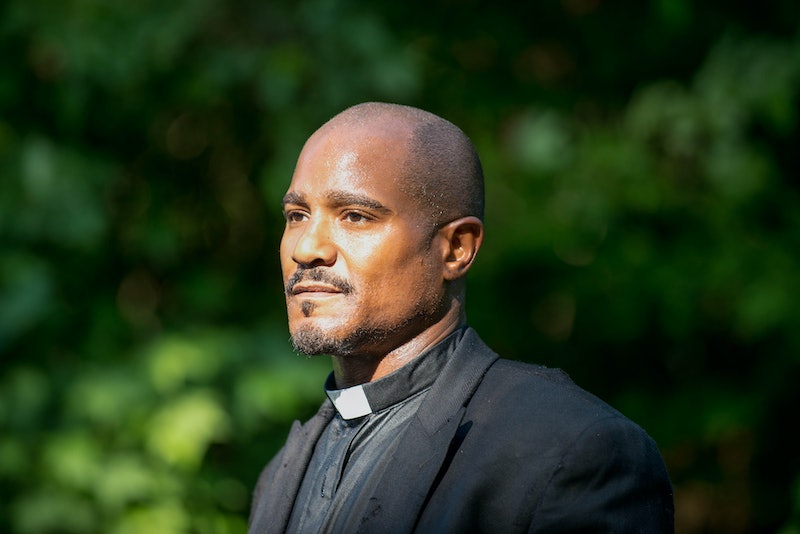 Throughout his time on The Walking Dead, the holiest man around seems to beg one nagging question: What the hell is wrong with Father Gabriel? He can't defend himself. He constantly looks like he's going to cry. Also, he was super shady and locked his entire congregation out of his church when the walkers first came. He's going to "burn for this." But there's being scared and not knowing how to defend yourself (Eugene) and then there's being an absolute basketcase (Gabriel). And in the Talking Dead sneak peak of the Walking Dead midseason finale, that whole basketcase thing is really driven home.

Father Gabriel is pushed to accept that he needs to like, learn how to kill a walker or he will die. (Duh.) He finally picks a weapon, the machete, but it's clear he has no plans to use it. In fact, he doesn't seem to have any plans. When Michonne says he's going to have to learn to fight, he actually runs away from home like an unruly 12-year-old. He crawls out of the church, unseen, and agonizes rather dramatically over the nail stuck in his foot (I have it on good authority that a nail straight up through the bottom of the foot is not actually as painful as you'd think, so Gabe's clearly a wimp). Then he wanders off, throws a walker down onto a spike, and when he sees her cross necklace decides he doesn't want to bash her undead brains in. Leaving her to struggle on a spike isn't exactly a more human option than putting her out of her misery, but we need to take baby steps with this fragile flower of a man.

In the sneak peek from The Walking Dead, Gabriel still doesn't have a plan. He's hanging out at what looks like a school and absolutely loses it when he finds a pretty white bible that belongs to "Mary B." While I'd like to think that Mary B is someone important, I can't find evidence of a Mary B in the comics and as Paul F. Tompkins pointed out to Chris Hardwick, "[Gabriel] seems to know every zombie."

Sure, the subsequent sight of a maggot-filled severed foot in contrast to the pure white book would be upsetting to lots of people who aren't living in apocalyptic Georgia, but for goodness sake, man, get used to it. You are living on a planet filled with these undead things. Grow the hell up.

Of course, the more amusing part of this whole scene is that Gabriel is just so damn hapless. He just left the only people who are likely ever going to be willing to help him and so far, he cannot kill a zombie when one inevitably tries to kill him (and hanging out near a building jampacked with walkers probably isn't a great idea for that reason). I would say he's a goner, but I doubt the show would put that much emphasis on him if that was the case. So we're back to square one: What is this dude's deal?