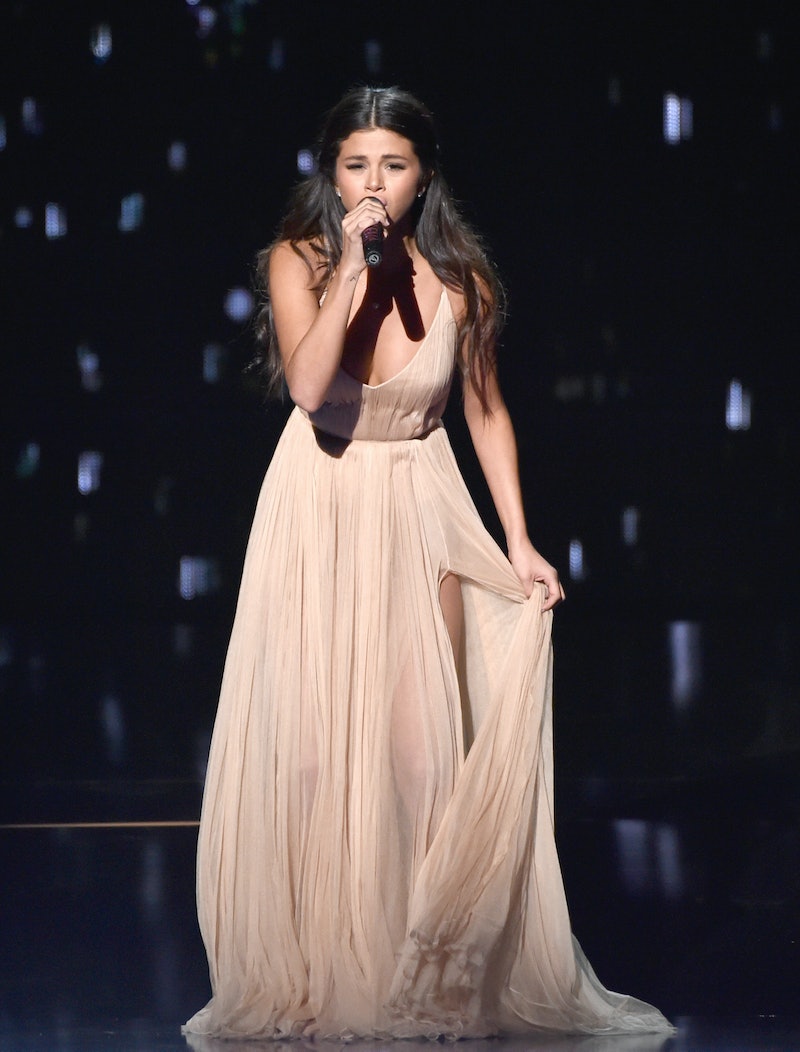 During Selena Gomez's emotional American Music Awards performance of "The Heart Wants What It Wants" on Sunday night, a lot of things were going through our minds. Although it's pretty clear that the song is about her tumultuous on-again, off-again relationship with Justin Bieber (and that his creepy silhouette appeared at the end of the song), some fans took it to the next level when she mouthed something mid-performance. After pausing to take a breath as her emotions got the best of her, Gomez says something to herself, which was captured by a super-close zoom in by cameras. But did she say "I love you, Justin" or "thank you, Jesus"? Jelena fans swear by the former, while to me, it's obvious she was saying a little prayer.

Gomez seemingly cleared this up on Instagram after her performance, using a hashtag to possibly explain the situation. "#thankyoujesus" was all she wrote on a photo from the AMAs. However, considering her album is titled For You and "The Heart Wants What It Wants" is almost 100 percent about Bieber, I can understand why fans automatically assumed that she was saying something to him during the performance. But Gomez is clearly keeping some things secret and speaking in code, which she may have learned from her best friend Taylor Swift. Decide what you think Gomez said with the evidence below.

More like this
Selena Gomez Is Fine Being Single, But She Still Manifested Romance On 'SNL'
By Martha Sorren, Jake Viswanath and Jack Irvin
Justin & Hailey Bieber's Bond Is "Unbreakable" Amid His Ramsay Hunt Diagnosis
By Bustle Editors
Adele Says It Would Be “Wonderful” To Have Kids With Boyfriend Rich Paul
By Jake Viswanath
Who Is Betty Who Dating? The Australian Singer Is Married To Her Tour Photographer
By Radhika Menon
Get Even More From Bustle — Sign Up For The Newsletter