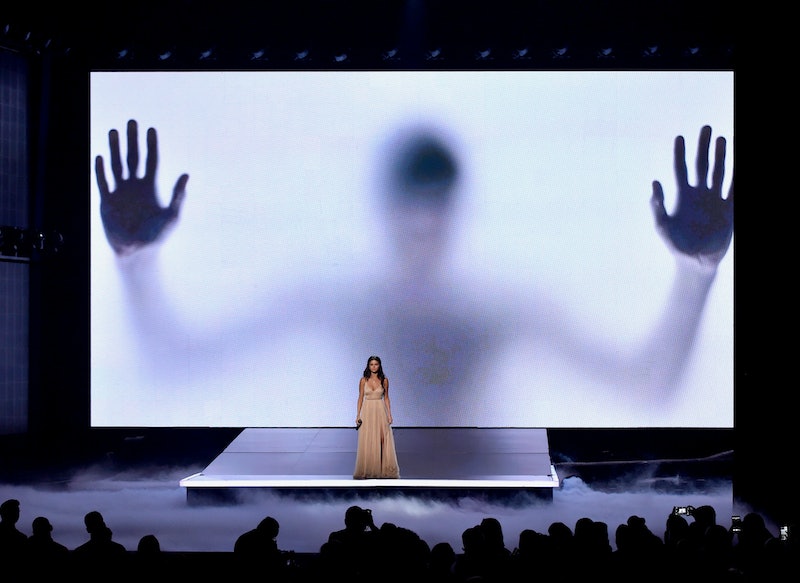 Even during Selena Gomez's AMAs performance of "The Heart Wants What It Wants," she couldn't escape her ex-boyfriend, Justin Bieber. Considering the track is almost 100 percent about him, that's not all too surprising, but the real question is whether Bieber's silhouette was behind Gomez on stage, or if it was just a generic representation of her ex creepin' on her. There was already a conspiracy theory floating around that she mouthed "I love you, Justin" during the performance (though it looks more like "thank you, Jesus") but the idea that Bieber was haunting her during the song isn't as outlandish. Either way, it was an ominous looming of this guy, and likely was some sort of message to the Biebs.

In order to officially decide whether it was Bieber in the background, I've gathered some pictures of his lanky body and little hands to examine. (It's OK to sing along: "My hands are small, I know, but they're not yours they are my own...") So far, both of them have been quiet on social media about the whole shadow situation, so we'll have to let the photos speak for themselves. Well, at least until Gomez or Bieber's next performance.

Exhibit A: His Body Type

Sorry to start this off with a nearly-naked photo of Bieber, but his hands, arms, and shoulders could match up to the silhouette behind Gomez. He looks a little more toned in his arms than the image, but it could be an old video clip.

Exhibit B: The Way His Arms Move

This is more of a "put your hands up!" concert move and he's wearing gloves, but it does look eerily similar.

The Biebs has small hands, but his fingers are as lanky as his body. It matches up.

If you lined up the silhouette with this photo, they would probably match up.

This isn't about his hands, but Gomez sprouted wings in her performance, and Bieber did the same during a performance. Coincidence or a sign?

More like this
Justin & Hailey Bieber’s Relationship Is “Unbreakable” After Their Two Health Scares
By Bustle Editors
Twitter Is Freaking Out Over Rihanna’s 2023 Super Bowl Halftime Show Announcement
By Stephanie Topacio Long
Everything To Know About Taylor Swift’s 10th Studio Album, 'Midnights'
By Grace Wehniainen and Jake Viswanath
What Demi Lovato Really Thinks About Child Stardom, Depression, & Sobriety
By Radhika Menon
Get Even More From Bustle — Sign Up For The Newsletter