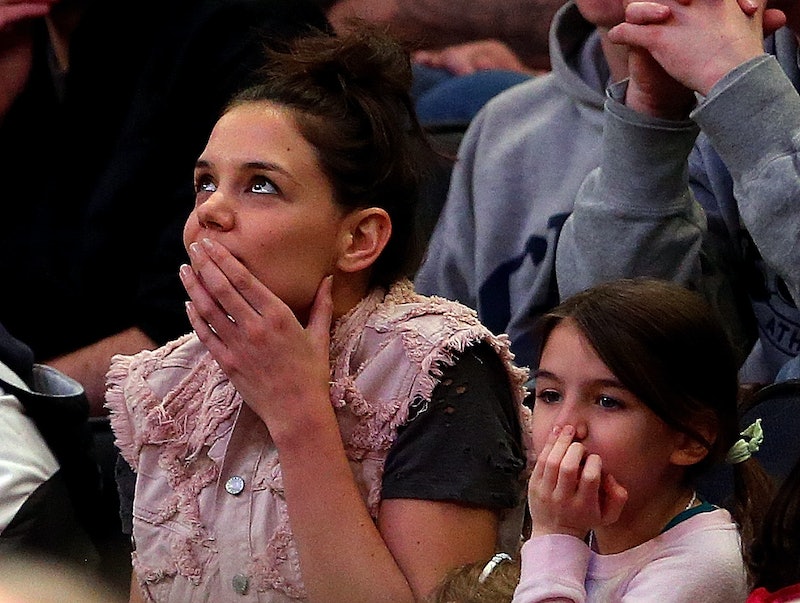 I imagine that it is a lot of pressure being a mother at Christmas time — let alone the mother to Suri Cruise. Suri Cruise is a legend among celebrity children and a style icon in general. How do you buy gifts for the daughter of Tom Cruise and Katie Holmes? I imagine that Suri Cruise has some high expectations for Santa Claus, and apparently this is true. Katie Holmes stopped by The Ellen DeGeneres Show to talk about her daughter's Christmas wish list and explained, "It's written out. She's very organized and I start to get a little bit of a panic because you cannot screw up talking to Santa. You cannot miss any item on that list, because if you screw that up, that's years and years of hearing about it—and then probably therapy."

Ellen asked the question that we were all thinking, "Is she abusing Santa? Does she have a long list of things? Or is she practical?" Surprisingly, Holmes said, "She's practical, she's just very specific. Like, 'I want a puppy, and then I want a pink collar that has sparkles on it that says the puppy's name. Then I want shoes for the dog... Then I want a purple clip.' Like, it's all very detailed." This got me thinking, what else would the coolest girl on the playground want for Christmas? I have some ideas. Some very specific ideas.

There is a big buzz about the iPad Air 2 this holiday season. Suri could use this tablet to write out her gift list for her birthday or even for next Christmas. She can play games and online shop for the latest fashions. However, she wouldn't just want the iPad Air 2. She would have to go all out, possibly asking for a pink cover with her monogram on it and a list of apps that should be already downloaded upon gifting.

No, Suri would not settle for a run of the mill princess gown from the Disney store. Suri would want a dress that is made just for her from a top designer. She would also need shoes to match and princess crown from a top jeweler.

Most 8-year-old girls are just starting to experiment with makeup and nail polish, but I just can't imagine Suri painting her own nails. I imagine her asking for a manicure and pedicure appointment at her favorite salon, with her preferred manicurist, and the latest nail polish with some sort of glitter design.

To be honest, I can't even imagine what would be on Suri Cruise's actual Christmas list. It is hard for me to get a grasp on how often she shops and how many gifts she receives from her parents and famous designers. I have no idea what kind of expectations that gives her for Santa Claus. Nevertheless, I know that everything on her list will be fabulous and top of the line. She is living the kind of life I want to lead and she is only 8 years old.