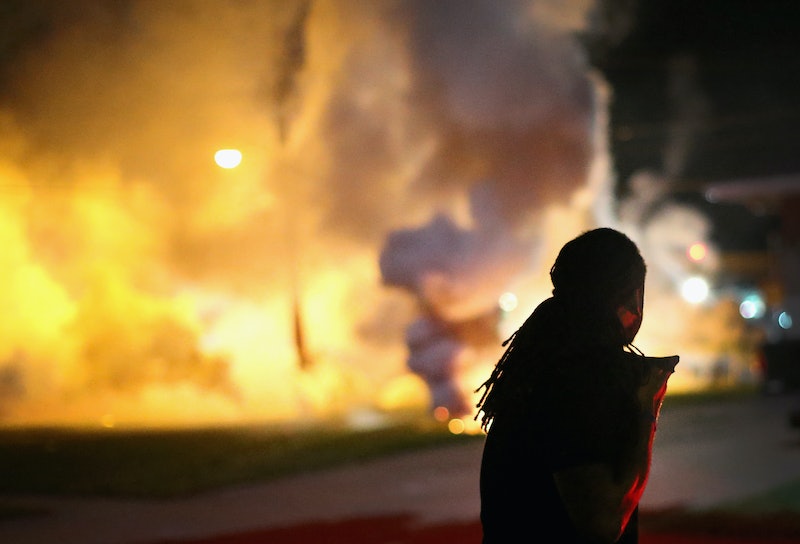 As the nation reels from Monday night's decision by a Ferguson grand jury clearing Darren Wilson of criminal charges in his fatal shooting of unarmed teenager Michael Brown, tempers flared across the country, and the St. Louis region erupted in chaos overnight. Despite Michael Brown Sr.'s impassioned and pre-emptive plea for peace and President Obama's reminder to honor the wishes of the slain 19-year-old's parents, the protestors' frustration and anger at the grand jury's verdict was could not be contained.

While the verdict sparked immediate, angry protests across the country, the St. Louis region was front and center in its wanton expression of outrage.

Ferguson burned as the sun rose; many of its buildings were set ablaze — 12 of which were considered "total losses," according to NBC News — destroying businesses and encouraging looters. Sixty-one arrests were made last night, according to numbers released by St. Louis County Police Sgt. Brian Schellman. In the wee hours of Tuesday, County Police Chief Jon Belmar held a press conference addressing the violence, but seemed to seek out plastering over the issue by suggesting more police instead of rooting out its cause. He said:

What I've seen tonight is probably much worse than the worst night we ever had in August and that's truly unfortunate. Unless we bring 10,000 policemen in here, I don't think we can prevent folks who really are intent on destroying a community.

Both Belmar and the St. Louis Police Department expressed their "disappointment" in the protestors' reaction. Prior to Monday night's announcement, protest organizers and the police had come to a limited agreement on "rules of engagement." Chief on the list was prioritizing "the preservation of human life," which the police had agreed to and obeyed last night — no deaths were reported despite the mayhem.

Missouri Governor Jay Nixon has authorized more National Guardsmen to the city on Tuesday morning to provide additional security. Belmar said at the early morning press conference that the fabric of the St. Louis community was "torn apart" by the violence, adding that he "personally heard about 150 shots fired" over the course of Monday night.

Although there seems to be a momentary lull in the city's rage, the protests at large don't seem to be going anywhere. Expressing the sentiment among Ferguson protestors, a resident and community organizer with Hands Up United, Malik Rhasaan told the Des Moines Register that the city's havoc paled in comparison to the sight of Brown's body lying in the street for hours following his death. Rhassan said:

They have insurance. They can rebuild. The life of Mike Brown can't be rebuilt. Our patience cannot be rebuilt.

However, those affected by the violence and vandalism thought otherwise. Richard Royal, a manager at a local restaurant chain that police ordered to close up early, told the Register the frustration and anger was understandable, but that the violence was "unnecessary." He added:

We could have done something better, like a boycott. That would have hit them in their pockets.