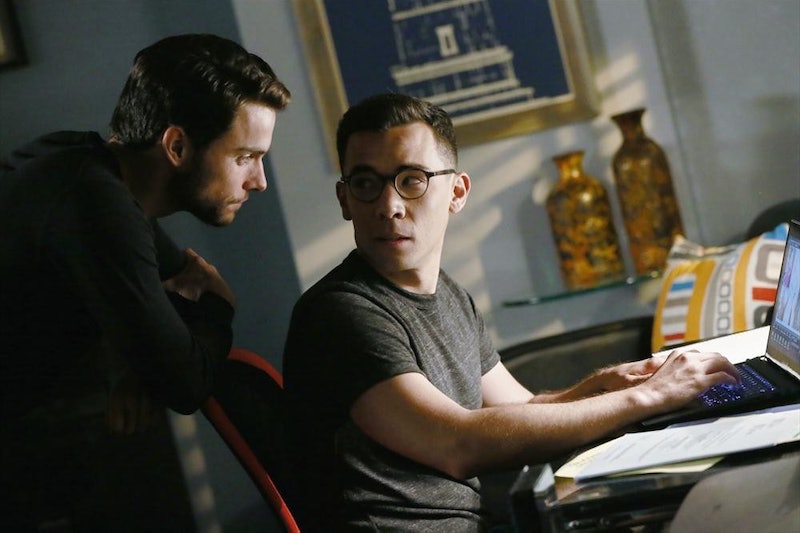 Just like everyone has always known there is something more going on with Bonnie than meets the platinum blonde eye, I've suspected since the moment Oliver returned to How to Get Away with Murder , proving himself more than just a one night fling to get information, that he would become important to the story.

And yet, he's still not totally important to the story. He's important because he bring out another side to Connor (y'know, actual emotion, meaning maybe he's not just a beautiful sociopath), and he's one of the few normal people on the show, but that's exactly it... as of yet, he's not in any way tied to the murders that have driven just about every other HTGAWM character crazy. For example, last episode, Connor showed up on his doorstep having a full-fledged panic attack — in that moment, I thought surely Oliver was about to be brought into the fold; that Connor doesn't have many close relationships, and Oliver was the only person he thought he could tell this terrible secret to. And then the only question would be, how would Oliver react to his ex-fling being a pseudo-murderer?

But Connor didn't tell Oliver. He took a shower, calmed down, and told him that he was addicted to drugs. Oliver seemed skeptical. So, now I have even more questions about Oliver's presence on the show. It's been awhile since the last steamy sex scene, and it's always seemed like the writers were keeping him around for more important reasons than torso shots, anyway. Will Connor end up telling Oliver the truth in order to keep him around? And in what ways does HTGAWM plan to ruin the life of its sweetest bespectacled character?

He could be called as a witness

The most likely explanation for Oliver's continued pop-up appearances throughout the series is that the show needs some sort of character who can testify for against each person in the 1L-Scooby-Gang, should they go to trial for Sam's murder. The romantic in me says that Connor didn't tell Oliver about Sam because he cares about him, and didn't want to put him in harm's way by involving him in a murder.

But he also could have potentially put himself in a bad situation — Oliver testifying to Connor's behavior that night could be pretty incriminating; even beyond the panic attack, being on drugs isn't exactly a rock solid alibi.

Connor could tell him about the murder

And the totally different romantic in me (OK, this isn't actually very romantic) says that Connor will ultimately tell Oliver about the events of that night because he trusts him and and needs his help because they're in loooooove. And then, Oliver would be really supportive, would remind Connor that he had the least to do with Sam's actual death — we'll just ignore all that limb chopping and body dumping for now — and then he'd help the Littlest Murder Team with all of his hacking skills. Or, you know, Connor could tell him and he could freak out and turn them all in because he seems to be the only person on the show who isn't totally chill about figuring out how to get away with murder.

Oliver could figure it out

Of course, at the rate with which Oliver has been showing up less and less, and the state in which he last saw Connor, we could go a few months, the case of the missing Sam could go national (especially with the maybe-reveal that Lila was pregnant with his child), and Oliver could start to piece a few things together.

How are any of these kids ever going to get away with murder if they can't stop showing up at the houses of people they barely know, weeping about being stressed, when they really look like they've just murdered someone?