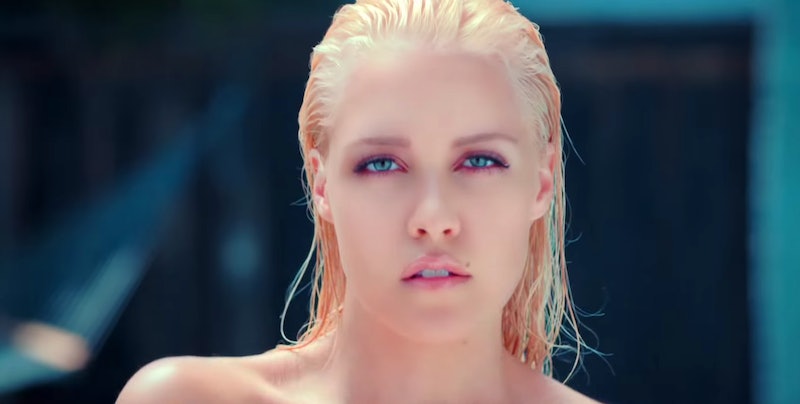 Eden xo is definitely an emerging pop music artist to watch. The 25-year-old singer-songwriter's new single, "Too Cool to Dance," is making waves at Top 40 radio, and she's currently deciding on the track list for her debut album. When asked during a recent interview with Bustle how she feels about influential performers like Beyoncé and Taylor Swift taking a stand for feminism this year, Eden says: "I don’t like to put any sort of labels on myself, but I will say I think it’s awesome to be, you know, 'girl power!' 'Female power!' I’ve always felt that way."

She continues: "One of the first groups that I remember falling in love with and owning their CD was the Spice Girls, and I loved when they’d always be like, 'girl power!' But I think it’s really about empowering everyone."

"I’m all about inspiring people ... to be better, to be more independent, you know, whatever that they want to do. I’m down with that. I’m Team Girl Power. I don’t put labels on anything, but I think that’s awesome if Beyoncé and Taylor want to. I support them, for sure."

Of course, I'll respect Eden's wish to not be labeled, but it's interesting to note that what she expressed ("empowering everyone") is essentially one of the core principles of feminism: that women and men should be treated equally and allowed the same opportunities in life. "Feminist" isn't a label that people should shy away from — it means that you support equality for all people. That's a wonderful, positive thing.

As a songwriter, Eden acknowledges that songwriting and producing are two areas of the music industry that are still primarily dominated by men (producing, especially) — but personally, she doesn't feel as though she's come up against any challenges related to being a woman in the recording studio.

"If anything, I think you almost have more power in the room ... I would never attempt to write a song for a guy, just because ... I have to write what I know and be honest and come from an honest place with my songwriting and I’m not a guy. I have boobs and I know what women think and I kind of relate. So, sometimes when you’re in the studio with male producers, I think they feel the same way. They look to the women to be like, 'Well would you guys say this? Do you like this? Is this cool?' And we’re always the ones being like, 'No, no, no, let me tell you how it is…' It’s definitely — at least everybody I’ve worked with — it’s always been very much a collaboration."

Eden's new single, "Too Cool to Dance," is available on iTunes, Amazon, and Spotify now.

More like this
The 'Hocus Pocus' Sequel Finally Has A Release Date & It Makes Total Sense
By Shannon Barbour and Radhika Menon
Adele’s All-Female Lineup Includes Kacey Musgraves, Mahalia, & Self Esteem
By Shahed Ezaydi
Adele Says Postponing Her Las Vegas Residency Was “Brutal”
By Alyssa Lapid
Adele Says It Would Be “Wonderful” To Have Kids With Boyfriend Rich Paul
By Jake Viswanath
Get Even More From Bustle — Sign Up For The Newsletter