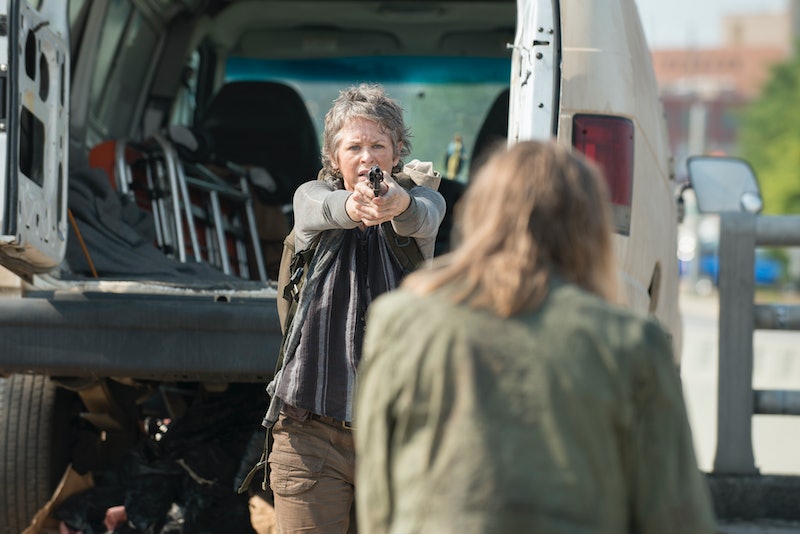 I think The Walking Dead fans have made it clear how we feel about Carol Peletier. She has been the all-star of Season 5, so could Carol die in the midseason finale? I really hope that's not the case, but it wouldn't be too surprising. She was the hero in the Season 5 premiere and we saw her reunite with The Walking Dead's most-loved character Daryl. She has a bit of a tortured past (you know, with shooting a child in the head last season), so could all of this be leading up to the end of Carol's arc?

Executive producer Greg Nicotero revealed that Carol was actually supposed to die in Season 3 instead of T-Dog. (T-Dog sacrificed himself so Carol would live.) Carol has become such a dynamic character since then, that I can't even imagine her not being on the show. She's had some of the most compelling story lines (and insane moments), but all of that makes me fear for her life even more. Of all the people who could reasonably die in the midseason finale episode "Coda," Carol would be the most devastating, but would also make the most sense. So if she does die, how will The Walking Dead do it? Here are a couple theories.

Uh, let's be real. Things are not looking super good for Carol right now. She's comatose in a hospital bed after being hit by a car. She was taken off life support, but thankfully Beth got a tip from Doctor Jerkface to give her medication. So maybe Carol will wake up in "Coda" because of Beth's intervention — but maybe she won't. It's hard enough to escape Grady Memorial Hospital when you're alive and well — so Carol needs to wake up ASAP. When Daryl and Rick show up at the hospital, I don't know how they could save her if she's still not awake. But I also can't imagine those men leaving Carol — unless she was already dead. I don't think I'm emotionally prepared to see a zombiefied Carol.

She Wakes Up — But Dies Saving Beth

Carol has done some pretty terrible — yet pretty necessary at times — things in the zombie apocalypse. If she does die, it seems only fair that she goes by doing something epically good. In this case, perhaps she would do something to save Beth. Daryl has a special spot in his heart for both Carol and Beth. I could see Carol being the one to sacrifice herself to save Beth — not only because she cares about Beth, but also because she cares about Daryl.

I hope that none of these theories come to fruition. But when a character has had a run like Carol, it's something that us fans must prepare ourselves for.