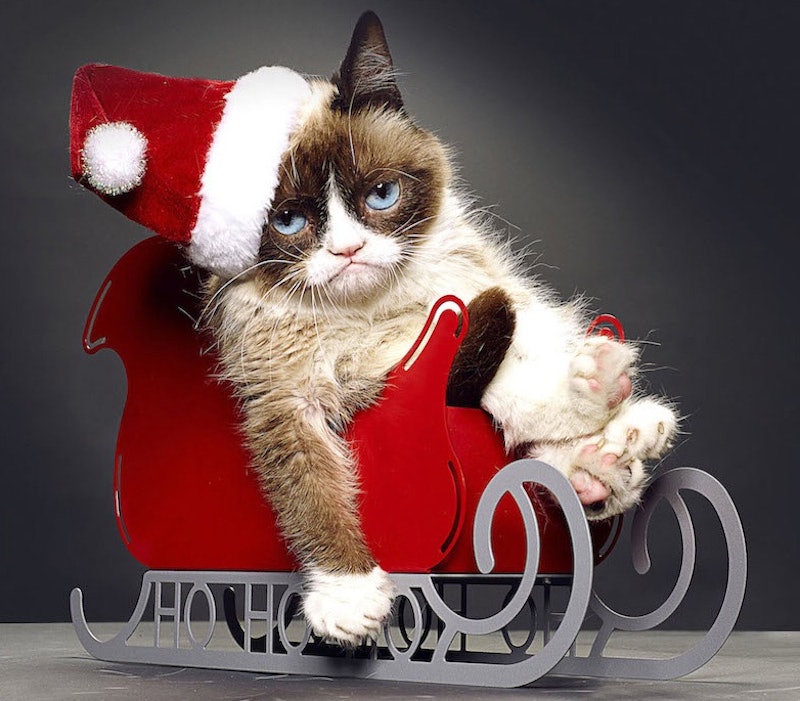 It seems like the only one not excited for Lifetime's upcoming original movie Grumpy Cat's Worst Christmas Ever is the titular feline herself... but since she pretty much always looks unenthused, it's kind of hard to tell. The cat with the surly sobriquet likely has one of the most recognizable faces in the entire world. And yet very few people know the mind behind the meme. Who is Grumpy Cat? And is she really as Grumpy as that famous face would lead you to believe?

You would think the reported $100 million that Grumpy Cat, whose real name is Tardar Sauce, has pulled in so far would wipe that scowl off her face, and yet she continues to insist on frowning. That's because she actually has a mild case of feline dwarfism, which, coupled with an unusual underbite, gives her the constantly dissatisfied expression that makes her so famous. Those who have worked with Tard say that she's actually quite pleasant to be around. "She just has a resting grumpy face," insists Evan Todd in an interview with Bustle. Todd co-stars in Worst Christmas Ever as Zack, a wannabe rockstar trying to steal a dog from Grumpy Cat's pet store. "She's actually a really cool cat and very chill. But she certainly has mastered the side-eye. You know when you've done something she doesn't like."

When she's not busy being a movie star, Tardar Sauce is just a regular household pet with a loving owner named Tabatha Bundesen. Tard (for short) was born in Arizona on April 4, 2012, which makes her about two-and-a-half years old. (She also has a brother named Pokey.) Tardar Sauce first gained international attention when Bundesen's brother, Bryan, posted an image of her face to Reddit on Sept. 22, 2012. That most infamous of internet black holes immediately did what it does best and latched onto Tard's hilariously cantakerous expression, obsessing over the feline until she was a worldwide meme phenomenon.

The word "phenomenon" is not an exaggeration. Bundesen quit her waitressing job to manage her cat's schedule full-time, according to The Hollywood Reporter. Bundesen's brother runs Tard's YouTube, Twitter, and Facebook page (which has nearly 7 million likes). THR also reports that they hired a manager, Ben Lashes, to organize Tardar Sauce's appearances on the likes of Good Morning, America, CBS Evening News, and American Idol, as well as at the South By Southwest festival (SXSW), where fans lined up for several blocks for the chance to take a picture with the world's favorite cat. She has been on the cover of both the Wall Street Journal and New York magazine. She has books, t-shirts, calendars, mugs, stuffed animals, and even "Grumppuccinos." And now she has her own movie.

So how did Tardar Sauce make out in her feature film debut (in which she's voiced by Parks And Recreation 's Aubrey Plaza)? Like a pro, if you ask Todd. "She knows how to give them what they want. Most of the retakes were when I blanked on a line because I was in awe of how honest and in the moment she was. I can only image it's similar to working with Judi Dench," her bipedal castmate enthuses. And when she wasn't filming, Tardar Sauce lead a pretty luxe lifestyle: "When the camera wasn't on her, the cat double would stand in and she would return to her trailer... which was by far the largest trailer on set," Todd says. "It housed her entire entourage including security, management, and doctor."

But don't let her accommodations give you the wrong impression, the celebrity cat sounds like a pleasure to work with — although not one to travel with if you're trying to fly under the radar. "I have never seen a celebrity attract so much attention when they walked through a mall," says Todd. "Hundreds and hundreds of people would show up to take a selfie with her. All the time. She's very gracious with her fans and she loves them all — though you'd never be able to tell." I asked Todd what would be the craziest thing we'd witness Grumpy Cat doing in Worst Christmas Ever. "You actually get to see her smile and laugh as she runs through a meadow of daisies. Not! I don't want to give anything away, but she does operate some pretty heavy machinery."

Watch out, world. Looks like Grumpy Cat's reign is only just beginning.

More like this
You’ve Got 'Love Island’s Farmer Will All Wrong
By Jack Orenstein
Picky Eater? Sensitive Stomach? This Vet Nutritionist-Designed Dog Food Has A Plan For That
By Maria Cassano
Dog Trainers Say These 30 Cheap Things On Amazon Are Pure Genius
By Allison Bolt
Amazon Keeps Selling Out Of These Pet Products Because They're So Freaking Cheap & Clever
By Sara Brown-Rigoli
Get Even More From Bustle — Sign Up For The Newsletter
From hair trends to relationship advice, our daily newsletter has everything you need to sound like a person who’s on TikTok, even if you aren’t.