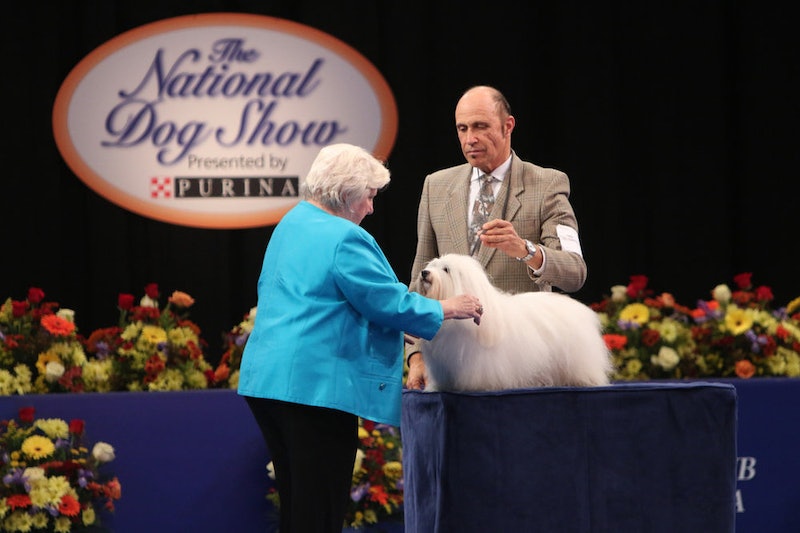 As your turkey was cooking this Thanksgiving, hopefully you managed to turn into The National Dog Show on NBC to watch the classiest and cutest dogs present themselves. The Bloodhound took Best in Show (with the Samoyed as the reserve Best in Show), but there were many other dogs that could have taken home the prize in my eyes. Besides the two new breeds that were introduced to The National Dog Show this year — the Wirehaired Vizsla and the Coton de Tulear (photo above) — there were also many other dog favorites featured. So fans of furry beasts big and small should have been "awww"ing Thanksgiving afternoon.

The National Dog Show splits the breeds into seven different groups and then the Best in Show is picked from the winner of each group. Since there were too many dogs to keep track of (especially if you partook in The National Dog Show drinking game), I followed the well-established dog show's format and chose the cutest guys from each group. The show, hosted by the Kennel Club of Philadelphia, divides the dogs into the following groups: Hound, Herding, Sporting, Non-Sporting, Terrier, Toy, and Working. Although the classifications may not always have made 100% sense to me, the preciousness of these pups was easy to comprehend.

First in Group (and Best in Show) went to Nathan the Bloodhound, but I was a fan of the little beagle that took second in the group. In the non-canine world, the girl pictured with her handsome hound was also a standout as one of the youngest dog handlers of the show.

These dogs are my jam. You've got some of the biggest, furriest, friendliest dogs in the Working Group with the Siberian Husky, different breeds of mastiffs, and the Bernese Mountain Dog. The Komondor ("the car wash special" as host John O'Hurley called it) was so fun and playful. But the winner was the Samoyed, (the breed was originally bred to herd reindeer!) and it's furry white coat was magnificent.

There is no other word for the Toy Group but "adorable" with dogs like the Cavalier King Charles Spaniel, the Pug, and the Pekingese (that I could not stop giggling at). The Affenpinscher, Ben, was another super furry friend and you could barely see his little face. He's like a baby Ewok, and he's the son of Banana Joe — who won Best in Show at the Westminster Dog Show. Ben deservedly won First in Group.

This group includes all of the different types of retrievers, setters, and some spaniels. The Weimaraner had a pretty silver coat and the Wirehaired Vizsla had a little beard. The Gordon Setter was awarded First in Group — although both co-host David Frei and I were rooting for the Golden Retriever to win.

This group is comprised of shepherds, collies, and sheepdogs — so pretty much I just need to get some sheep so I can have one of these dogs herd them for me. The Shetland Sheepdog was beautiful and the Puli was all black and looked like a little mop trotting around. But Zack the Bearded Collie rightfully won as he was described as "hairy, bright, independent" by Frei. His silver and white coat is familiar since as O'Hurley pointed out, he is the same breed as The Brady Bunch's dog.

The West Highland White Terrier (which you may recognize as the ridiculously cute dog from the Cesar dog food commercials) is a part of this group. Other familiar dog faces from TV and film in the Terrier Group are the Russell Terrier (from The Artist) and the Scottish Terrier (Jock in Lady and the Tramp). The Smooth Fox Terrier (who was not as half as adorable as some of the other guys) won first, but that's OK since I still got my fill of the other cutie pies.

Every time I decided which group was my favorite, the next group kept upping the ante. Some of the stars of the Non-Sporting Group were the Bichon Frise, the array of poodles, the American Eskimo Dog, and the Chow Chow. The Coton de Tulear was a new breed and he looked like a big ole cotton ball, but the spunky French Bulldog took home first.

Now that the show is over, you may be going through dog withdrawal, but hopefully you have your own pooch to comfort you at home. And if not, at least there is turkey to find solace in.