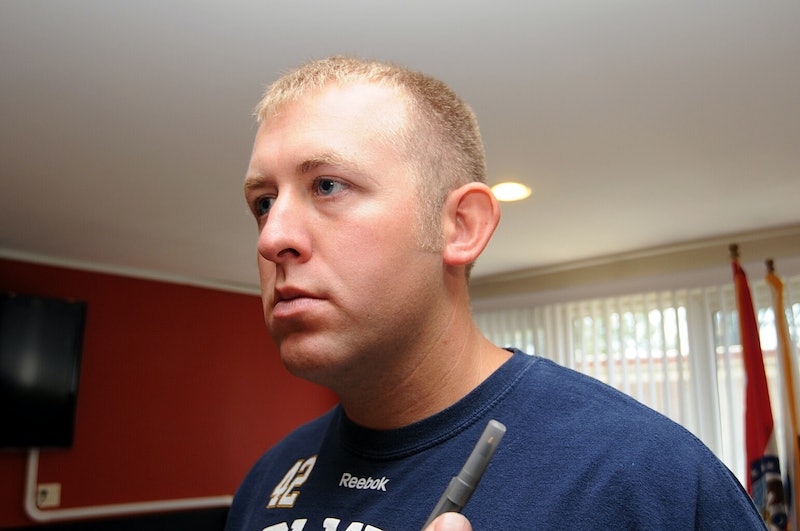 Ferguson police officer Darren Wilson handed in his resignation letter on Saturday afternoon, following speculation that the embattled cop wouldn't be returning to the police force. Wilson has been on paid administrative leave from the Ferguson Police Department since Aug. 9, the day he fatally shot unarmed teenager Michael Brown. Although Wilson will now be trading in his paid leave for unemployment, his financial situation may not be so bad after all.

Since taking a leave of absence from the police force in early August, Wilson has been hiding out, fearful of being recognized in public. He reportedly moved from house to house, sometimes staying with his current attorney. Wilson recently told ABC News anchor George Stephanopoulos in an exclusive interview that his life has been "stressed" over the last four months. "You’re always looking, you’re always wondering if someone’ll recognize you, if someone is following you," Wilson said.

Although it has been widely speculated that Wilson would resign from the police force, the 28-year-old former officer told the St. Louis Post-Dispatch in an interview on Saturday he's resigning because of alleged violent threats made against the police department. "I'm not willing to let someone else get hurt because of me," Wilson told the news source. Mayor James Holmes said that he would not receive a severance package.

But while Wilson may be out of a job, he may not be at a total loss. With donations flowing in and an alleged paid interview from ABC News, the former Ferguson cop may have enough funding to keep him going.

While the Brown family received funds from supporters across the United States, Darren Wilson supporters were busy collecting donations for the embattled officer — and the final total may make him a millionaire. An anonymous woman who reportedly started three pro-Darren Wilson Facebook pages — "We Are Darren Wilson," "I Support Officer Wilson" and "Support Darren Wilson" — told The Daily Mail that her backers have raised around $500,000 for the former police officer. However, this number was just a "conservative" estimate, she said. She added that when all is said and done, that number may easily jump into the seven figures.

To raise these donations, the unnamed woman began selling "I Stand By Darren Wilson" shirts and wristbands at rallies in the St. Louis area. The "We Are Darren Wilson" page also has an accompanying GoFundMe account, which was created in early November. So far, just $2,075 has been raised through that page.

However, a previous GoFundMe account sponsored by Wilson supporters raised more than $235,000 before abruptly closing its donations in early September. A separate fundraising page ran by the police organization and certified charity Shield Of Hope had raised nearly $200,000 when it also disappeared in early September.

The unnamed Wilson supporter told The Daily Mail that all of those funds, as well as any more that are raised, would help Wilson pay for any legal fees he's incurred. If the money reached Wilson, it's earmarked to help Wilson and his family relocate and live for the next few months, as his job prospects are, most likely, nonexistent at the moment.

Wilson May Have Gotten Paid For His Interview

Did Wilson receive a hefty sum from ABC News for his exclusive interview with George Stephanopoulos. According to the website Got News, ABC and NBC were embroiled in a bidding war over the anticipated interview, but ABC won out because of the price the news outlet was willing to pay. Got News reported Wilson a received a "mid-to-high" six-figure fee for the interview. This remains unconfirmed.

Wilson was placed on paid leave immediately following Brown's death. While that doesn't necessarily mean he was rolling in the dough for the last four months, Wilson was still receiving payments from his place of employment. Salary data from Indeed.com shows the average salary for a Ferguson police officer is around $66,000 per year, while data from the Bureau of Labor Statistics places the average mean hourly wage for an officer in the St. Louis area is nearly $36.