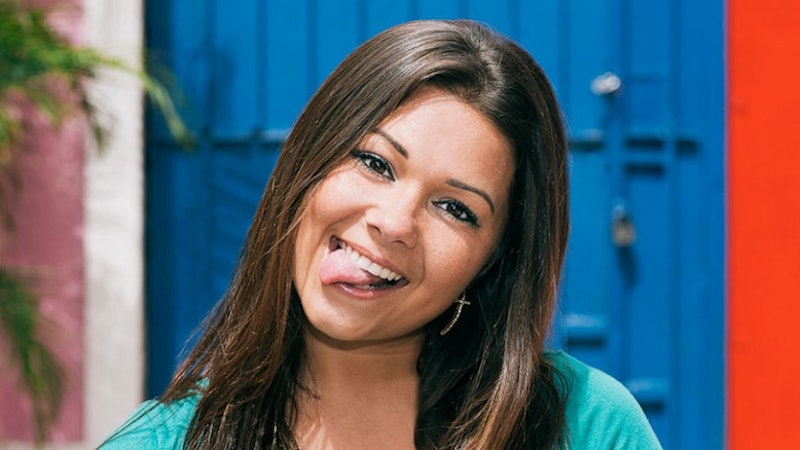 As far as this season's Are You The One ? cast goes, Ellie Puckett is definitely my fave. She's adorable, funny, and real, which makes it hard to believe that this far into the competition she has yet to find her match. But the AYTO dating pool is getting more and more shallow every week, and it's becoming a legitimate concern that the cast isn't going to be able to figure out their matches in time to win the $1 million prize. Sigh. If only MTV would have enlisted me to assist them, because I've been charting out matches since the beginning of the season. I totally called it that Brandon and Christina wouldn't end up as each other's match when they entered the truth booth a few weeks ago. And my next best guess? Ellie and Nathan are totally a match.

I know what you're thinking: Nathan's still so hung up on Christina, and Ellie deserves better than that. I understand, and I feel the same way, but you have to remember that feelings have absolutely nothing to do with the algorithm MTV used to determine who each housemate's perfect match is. There is no law written that perfect matches are required to get married after the show is over — or even like each other, really — they just have to figure out that they're a match if they want to go home with the money. And even though they may not actually have feelings for each other right now, Ellie and Nathan make total sense.

Although I'm not always a huge fan of Nathan, I do think that Ellie and her big heart — and equally big mouth — would be exactly what he needs. Despite the fact that MTV pegged him as a total jerk in his cast bio, on the show, he doesn't come off that way. He's super cute, and seems genuine when he shares his feelings, which is probably pretty hard to do on reality TV. As a result, Nathan often comes on too strong, and I think the same thing can be said for Ellie. I think they'd make a good pair simply on the basis that they would understand the way each other thinks, which is important in any relationship.

Also, this may or may not be a clue as to how the season turns out, but I'll leave it to you to decide. Nathan regularly retweets fans who are in support of him and Ellie as a couple when they post things like this:

My fingers are crossed!

More like this
We’ve Got A Text! Another 'Love Island' Series Is On The Way
By Darshita Goyal
Twitter Can’t Get Enough Of The Romance In 'Ekin-Su & Davide: Homecomings'
By Sophie McEvoy
Meghan Markle Just Addressed *Those* Wild 'Real Housewives' Rumours
By Sophie McEvoy
6 Of Mike Tindall’s Unfiltered & Royally Entertaining Jungle Confessions
By El Hunt
Get Even More From Bustle — Sign Up For The Newsletter