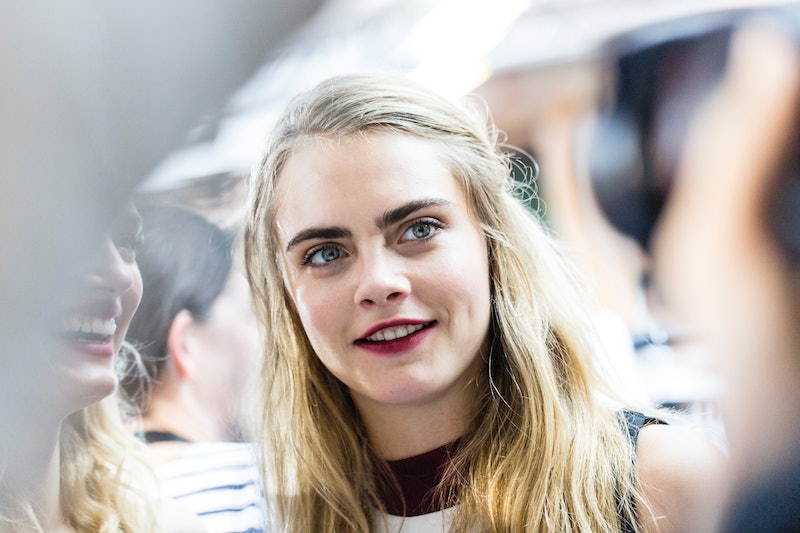 Delevingne revealed her latest ink on Instagram (naturally), holding up her insect tat next to the now-staple lion design she got back in 2013. They're both excruciatingly cool, and devoid of color.

There are a few theories as to which type of insect (bee? wasp? some other flying creature?) is now permanently etched on her hand, but it's like a children's book is unfolding on Delevingne's digits!

The shot is bathed in red light and it appears to be a snap of her fingers. In the pic, the lion, with its familiar furry mane and expressive face, which is impressive since all that detail is so vivid while packed into a really small piece of skin real estate, is right there.

Then there is an above-the-knuckle insect on her left hand. The lion lives on her right hand on her index finger. She also has a heart outline on her left pinky finger.

Delevingne didn't offer much information in the way of confirming her ink nor did she namecheck a celeb tattooist in the caption, leaving fans and followers with more than a few questions. One could surmise that it's someone else's finger, since, well, you never know. Celebs do bond over ink... but methinks this is a new finger tattoo for Delevingne.

Delevingne is amassing an adorable collection on her hands. Rihanna is also a fan of hand region tattoos, as evidenced by her extensive hand piece.

More like this
12 Absolutely Angelic Cherub Tattoo Designs
By Paris Giles
Ciara On Her Biggest Skin Care #Fail
By Rachel Lapidos
13 Caffeine-Infused Eye Creams, Patches, & Serums For Puffy Under Eyes
By Olivia Rose Ferreiro
This Week’s New Makeup Releases & More Beauty Headlines
By Audrey Noble and Erin Stovall
Get Even More From Bustle — Sign Up For The Newsletter