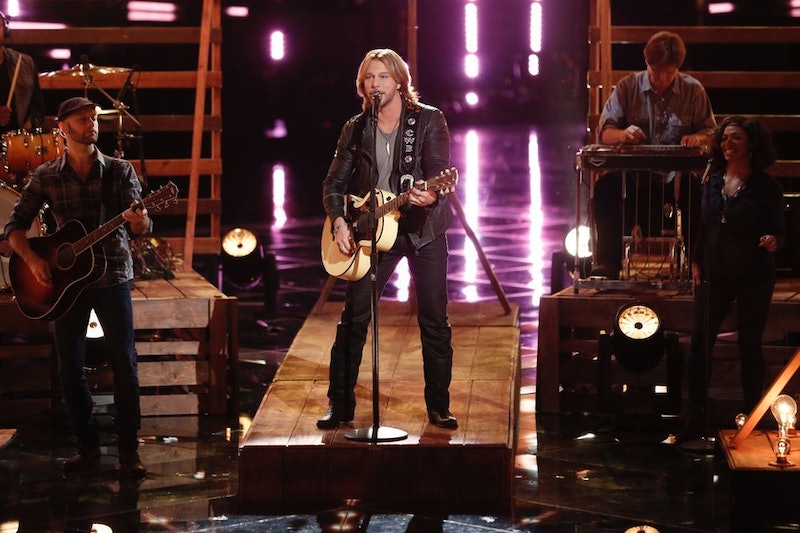 Craig Wayne Boyd is certainly an underdog in this competition. The odds are stacked against him: he's one of the oldest competitors, the only country artist, and the only remaining member of Team Blake. But Boyd proved tonight that whether he's singing a power ballad or a classic rock favorite, he can put on a great performance, both technically and performance-wise. Boyd's performance of The Eagles' "Take It Easy" was easy and fun to listen to, and is strong enough to bring him into the The Voice Top 5 (and hopefully further).

The coolest part about Boyd's performance tonight is that he was just on stage having a good time. He didn't need crazy fog effects or dramatic staircases to help his performance stand out. Maybe it's just because I'm a huge country fan, but I'd take a performance like his over a dramatic smoke screen and mirrors performance any day. Boyd's ability to deliver a flawless performance, while having a blast AND getting the audience to have a blast, with just a simple set and a couple of guys with their instruments proves that he's ready to be a real rockstar.

Boyd has always stood out to me, though he always seems to slide to the background in some way. He isn't someone that's raved about often, but his skills deserve to be recognized. Sure, he's a little rough around the edges, even after his Swift-over, but that adds to his country boy charm. Though he may not have what it takes to win over America's vote (re: a pretty-boy smile, super-sad sob story, etc.) and become the winner of The Voice, he deserves to have a fruitful career. Boyd is what I consider to be a timeless talent, and that will take him far, whether it's on The Voice or not.

More like this
Rihanna Tells Us To Shush About New Music In Super Bowl Halftime Show Trailer
By Jake Viswanath
'Breaking Bad' Duo Walt & Jesse Are Back — In This Super Bowl Commercial
By Jake Viswanath
Matteo Berrettini & Ajla Tomljanovic Split Shortly After Filming Break Point
By Brad Witter
Taylor Fritz's Girlfriend Documents Her Life With The Tennis Pro On TikTok
By Brad Witter
Get Even More From Bustle — Sign Up For The Newsletter
From hair trends to relationship advice, our daily newsletter has everything you need to sound like a person who’s on TikTok, even if you aren’t.