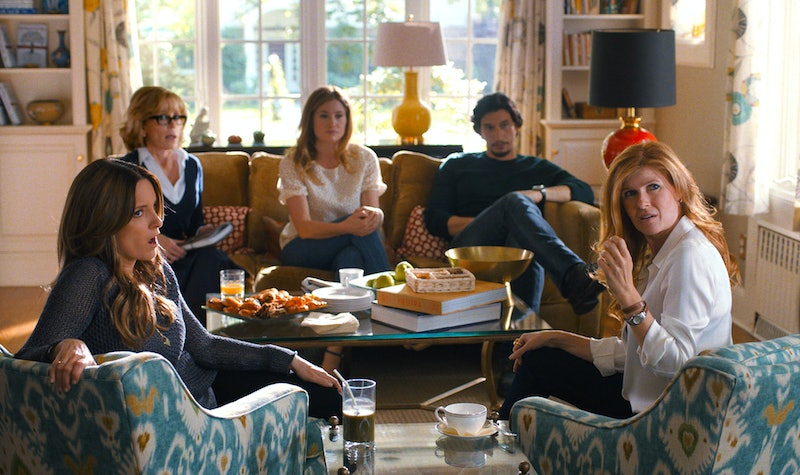 Don’t get me wrong. I love my family to no end. We’re loud and crazy, and there are a lot of us. But outside of my parents, my sister, and my boyfriend’s parents and siblings, I don’t see the rest of my family save for the holidays. Maybe this is true for you, too. This means that you probably have a few things to talk about with your family once the holidays roll around — and by a few, I mean basically everything that has happened to you/is happening in the world/they randomly think to talk about that has happened in the 364 days since the last time you saw them. And yeah. It's going to be a little uncomfortable.

These conversations are inevitable. Even if you already talked about some of these things at Thanksgiving, someone else will probably bring them up again at Christmas. You can either wait around for these conversations to happen upon you in the form of your aunt’s annoying new boyfriend, or you can fill up on wine and take these talks head on.

But seriously, get some wine. Here are 10 talks you WILL have with your family this season. You might as well be prepared.

Oh, girl. There’s no getting out of this one. There's also no way to win. It doesn’t matter if you’re single or taken, your family members, bless them, will ask you to divulge the most intimate details of your personal life like it’s no big deal.

Your grandmother will casually ask, “Why aren’t you dating anyone?” Um, because I work 50 hours a week and I haven’t found anyone who appreciates sloths as much as I do. And then your aunt will chime in, “Well, are you looking?” Does sometimes glancing up from my phone on the subway count as looking? And then, to top it off, your younger, married cousin will smugly say, “I feel so bad that you can’t find someone to settle down with.” Yo, you’re the one who needs to settle down.

On the other hand, if you are with someone, you’ll constantly get asked when the “Big Day” will be. During the first year, your mom might apprehensively ask, “So…. Have you maybe talked about marriage ever?” But by year four with still no rock, your family will basically start to demand that a wedding take place immediately. Believe me, I cannot go to a single family function now without at least one person making some off-handed comment to my boyfriend or myself. Even distant relatives we only see at important functions have been making not-so-funny jokes like, “I guess the next time we’ll see you is the wedding, right? Right?”

Whatever the case, this would be the time to refill your wine glass and escape.

2. The “Status of Your Uterus” Talk

Oh, lovely. Another unavoidable and unwinnable conversation. Maybe you’re like me, and being around children makes you want to take every form of birth control imaginable. Or maybe you already have a bundle of joy or two at home, and you’re all good. But people will always inquire about the vacancy or occupancy of your womb.

As I mentioned, I am what some people like to refer to as “childless.” I’m also 25 years old, so it’s not like my baby making years are close to over. But still, I can’t even go near one of my cousin’s kids without a family member asking when I’ll “have one of my own.” No joke, someone asked me, point blank, when I was going to have kids — because my dad needed grandchildren. My father needs me to procreate, you guys. Please. Stop yourself.

But oh goodness, if you already have kids, I think you may get it worse. If you have one, people will ask when you’ll have another. If you have a boy, they’ll ask if you’ll try for a girl, and visa versa. At least one person will eye your lack of alcoholic beverage (because you were heading to the kitchen when they stopped you), or your showing roots (because you ain’t got time to spend three hours in the salon), or your grumpiness (because people will not stop asking about your uterus), and give you a nudge-nudge like they know what’s up. Spoiler alert: They do not know what’s up, only you do.

3. The “What is Technology Even?” Talk

I’m the first to admit that I do not get Snapchat — you just take pictures of your face and send them to people? Isn’t that what Instagram is about? And if I’m questioning the technology of this generation, it’s no wonder that some of your relatives have a lot of questions about technology. Even my mother, a very intelligent and capable woman, had to be told that there is a difference between deleting and archiving her emails after I noticed her iPhone iMail notification bubble read “40,971.” I’ve had to explain everything from what the function of a hashtag is to how to take a picture with their own camera to my relatives. Once again, fill up on wine (are you sensing a trend? That trend is wine), and try not to roll your eyes.

My parents are divorced and their parents are divorced, so we have very distinct sides of our family. Even so, unless both sides of your family live close/get along with each other, you probably only see one side for the holidays. But both/some/all sides of your family would have had to have met at some point. So after all the uterus and dating questions are exhausted, they’ll probably ask how your mom is doing, or how that one cousin who went to rehab is doing, or how your great-great aunt on your dad’s side they met one time at your 13th birthday party is doing. You’ll politely fill them in on whatever details you know of, since, hey, I guess it’s kind of nice they asked.

Until I was 12, I ate very little meat. I was never, ever a vegetarian. But to this day, my mother’s brother makes a comment when I reach for the roast beef at Christmas lunch regarding “whether I’m a vegetarian anymore.” Your family will probably make a few comments on what you’re putting into your mouth while around them. They’ll ask if you’re vegetarian, flexitarian, pescetarian, vegan, gluten-free, paleo, free range, FitBit, pumpkin spiced, artisanal, and whatever else food-related thing they heard on Good Morning America. Probably none of these diets will relate to you, but good luck talking about why everything has kale now.

Hahaha, just kidding. Do not, I repeat, do not talk about politics. Even if every single member of your family has the same political views as you, don’t even go there. You’ll just end up riled up.

7. The “What Are You Doing With Your Life?” Talk

You can’t really blame your family for wanting to know how you spend most of your time. Maybe some of you are still in school — that’s an easy answer. Just tell them what you’re studying and move on. But it’s not such an easy answer when you have to explain why you majored in American history, but are now a skipper on the Disneyland Jungle Cruise. Mostly, I just mumble something about being a writer and pretend I have to take a very important phone call.

Like politics, it’s not very festive to talk about money. But if you happen to be talking to someone about money that they will be giving you for Christmas (thanks grandma!), then talk away.

Family gatherings always mean nostalgia. Everyone will talk about that one Christmas, that one reunion, that one ex-boyfriend, that one funny thing your sister said, that one home video. Let’s be honest, we probably spend the majority of our time together talking about old memories rather than making new ones. My grandpa will always talk about growing up in New York, my cousin will always recount the time my sister got saw dust in her eye (because he blew it into her eye), and my dad will always recount soccer stories. That’s just the way of the holidays.

If you come from a large family, it probably takes you 30 minutes to say goodbye. I’m completely serious. Because not only do you actually have to say “goodbye,” but you have to explain why you’re leaving, what you’re going to do afterwards, what you’re doing the next day, when you’ll visit, etc. And you have to say these things to every single person there. I envy those of you who have small families. But to those of us who have large families, saying goodbye really is a whole talk.