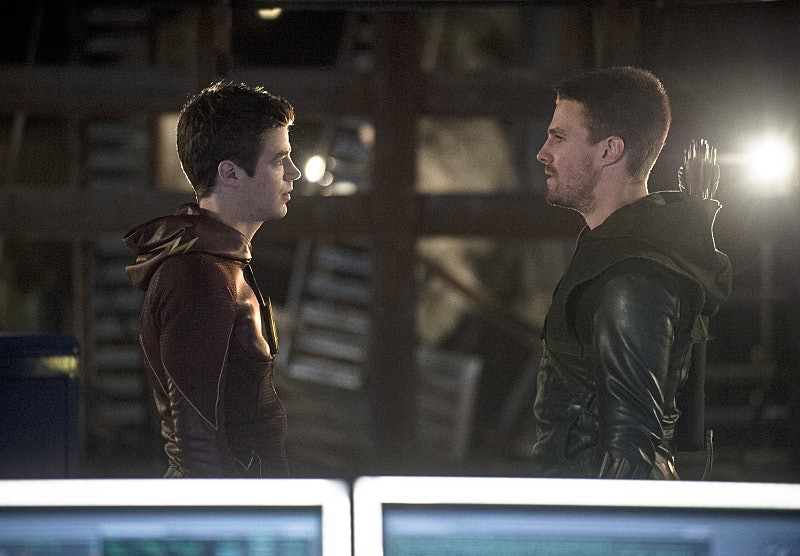 Thanksgiving may be over, but The CW has given its viewers something to be extra thankful for this week. I'm, of course, referring to The Flash and Arrow crossover episodes, which will serve up a double dose of these two iconic vigilantes as they battle evil (and even each other) in this special two-night event titled "Flash vs. Arrow" and "The Brave and The Bold." But when exactly is this Flash and Arrow crossover taking place? Well, The Flash kicked off the first hour at 8 p.m. (ET) on Tuesday, Dec. 2, while Arrow will wrap up the second and final hour at 8 p.m. (ET) on Wednesday, Dec. 3. But don't let this epic showdown fool you, folks, because, in fact, this crossover is not the midseason finale for either show.

That's right, you heard me. Though these particular episodes have been surrounded by a great deal of hype, the midseason finales are actually happening the following week on Tuesday, Dec. 9 and Wednesday, Dec. 10. So you know what that means? We still have another full week of Barry Allen and Oliver Queen goodness at our disposal. (What can I say? Christmas came early this year.) And while I'm sure these shows are bound to leave us with jaw-dropping cliffhangers, I thought I'd take a moment to list what I, personally, hope to see happen from both series before 2014 comes to a close.

The Return of Ronnie Raymond (aka Firestorm)

We've seen Robbie Amell make his Flash debut in flashback form, so I'd say it's about time we see what Caitlin's fiancé has been up to since then. And from the look of things, I may just get my wish considering Amell made a brief appearance in the final scene of The Flash on Tuesday and is signed up to appear in the Dec. 9 episode "The Man in the Yellow Suit." All I have to say is: Bring. It. On.

For Iris To Discover Barry's Secret

I understand that she's being kept in the dark for her own protection, but I think this side plot will prove to be much more compelling once Iris discovers that her best friend has a need for speed. I'm extremely curious to see how she would react and if it could even tip the scales of attraction in Barry's favor. But my patience is waning, writers, so let's make this happen sooner rather than later, shall we?

Another Kiss Between Ray & Felicity

Ideally, I'd want to see another Olicity lip-lock, however, Oliver's made it pretty clear that he's trying to keep his distance from our favorite blonde, at least for the time being. And you have to admit, Raylicity does have some serious chemistry — an aspect that I wouldn't mind exploring in the very near future.

The Reveal of Sara Lance's Killer

We've been wanting an answer to this question since Day 1 of Arrow Season 3. Who killed Sara Lance? We now know it wasn't Roy, but that still leaves quite a few possible suspects up in the air. Many believe it was Ra's al Ghul (or at least someone hired by him), but that may be a bit too obvious for Arrow's standards. Either way, though, it'd be nice to end these little fake-outs and finally close the book on this story arc. We've waited long enough.