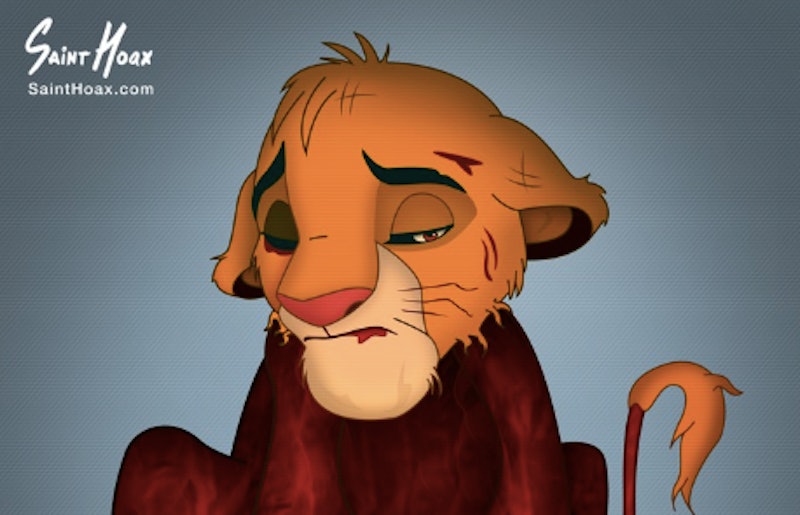 In the past year, Middle Eastern artist Saint Hoax has courted controversy with projects like the “ Princest Diaries,” “Happy Never After” and “Prince Charmless,” and now he is fighting against the fur trade industry with “Furry Tale Gone Bad.” What if 101 Dalmatians hadn’t ended happily and Cruella de Vil had gotten her way? While organizations like PETA have led the anti-fur movement with the help of celebrities such as P!nk, this Saint Hoax project hopes to tug on the heartstrings of current and potential fur wearers by using the images of not just the Dalmatians, but other beloved Disney animals.

The images are just as shocking as Saint Hoax's other campaigns. This campaign features Bambi, Simba, and Abu, among others, with bruised and bloodied faces and skinned torsos dripping blood. Under each image is Saint Hoax’s call-to-action:

Animals are beaten, electrocuted, or even skinned alive for their fur. Boycott fur.

According to Born Free USA, a national animal advocacy nonprofit, more than 50 million animals are killed for their fur everyday and “methods used to kill animals for their fur include gassing, electrocution, and neck breaking.” While Saint Hoax’s images are easier to look at than images of real skinned animals, this also makes them, and the message of the anti-fur movement, more accessible.

According to New York Daily News, Saint Hoax began working on this campaign over a month ago, researching the fur trade industry to help him understand what animals experienced and how to properly capture the image of a skinned animal.

Like some of his other campaigns, he used Disney characters because they "are beloved by almost everyone. We grew up watching and loving these characters. Seeing them vulnerable and skinned helps people understand the cruelty of the fur industry."

"Although these characters are meant to be animals, they tend to remind us of humans because they're are given personalities, emotions, background stories and often voices,” he told New York Daily News. “For that, seeing them bloody and tortured speaks to people that aren't generally sympathetic towards the usual skinned animal photos.”