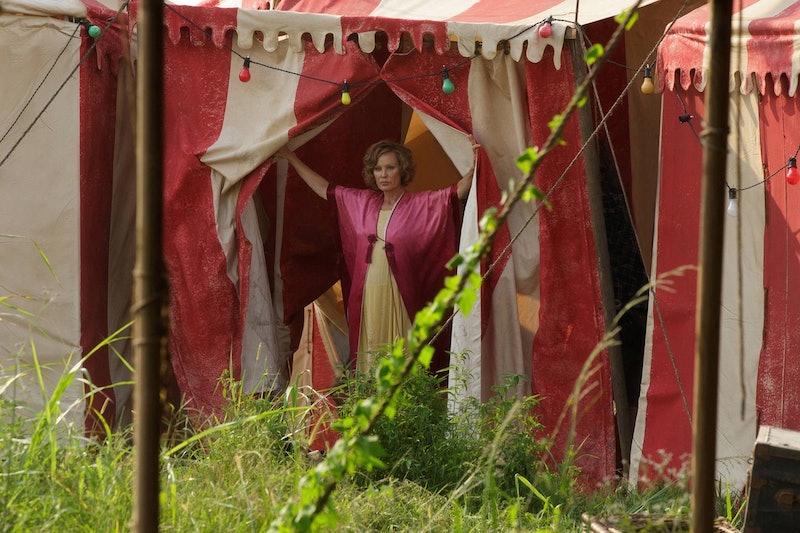 Ever since Ryan Murphy announced that all of the seasons of American Horror Story were connected, many fans of the show went detective on the three past seasons and the current season to try and find the common thread between Murder House, Asylum, Coven, and Freak Show. Jessica Lange, the American Horror Story actor whose presence could be soon ending on the series, seems to be at the intersection of all four seasons. Asylum 's Sister Jude and Freak Show 's Elsa Mars have enough in common that it caused me to go back and watch Murder House again to closely analyze Lange's Constance. There seems to be one thing that ignites each of Lange's characters, and that's the idea of fame.

We know that there are — as of now — two AHS characters that will hover between both two of the AHS universes: Sister Mary Eunice (from Asylum and Freak Show ) and Pepper (from the same two seasons). What differs with Constance, Sister Jude, Fiona, and Elsa is that they are not the same person in the literal sense — unless Murphy plans to have Lange's characters be hundreds of years old, and with Fiona's history, that is very possible.

So assuming that these aren't all the same women (Bustle's Kelly Schremph suggests the theory that Elsa and Sister Jude could be twins — and based on the time frame, it's very possible) how do they all connect? Let's break down each character to refresh:

Constance — the mother of Tate, Addie, and Beauregard — moved to Los Angeles (where Murder House takes place) to become an actress. She didn't believe in the nude work that became popular in Hollywood, so her dreams of fame slowly slipped away.

Sister Jude was a nightclub singer before becoming the Sister Jude. After drinking too much she hit a young girl while driving home one night.

While Fiona wasn't necessarily dreaming of being famous, she did seek eternal youth and rolled with a pretty high profile crowd.

Elsa Mars in Freak Show is the most obvious of the four fame seekers. She wants fame, and will do just about anything to get it. A dangerous combination for American Horror Story.

So if all of these characters are all connected through their desire for fame, there are a few options the show could go. First, all of Lange's characters could be versions of the same person in different universes. It has never been discussed if all of these worlds exist in the same universe or not, so it is very possible that Lange plays the same person (or soul, perhaps) across many different worlds.

The second option, which would be a total bummer, is if one of the characters was the real person, and the other three (or how ever many there might be in the future) are dreamt up, or figments of the imagination. I personally hate when shows use the "it was all a dream" reasoning to get out of coming up with something truly creative, but this could be an option. But perhaps this is all Constance's dreamt up famous lives of what could have been.

Whatever the answer is, I think the desire for fame is too obvious across all four of Lange's characters to ignore. Unless she comes back as a truly selfless character who wants nothing to do with the public eye in the next season (if Lange comes back for another season...) then disregard, but until then, I am going to run with this.

More like this
The 'Firefly Lane' Book Ending Teases Way More Tears To Come In 2023
By K.W. Colyard
Everything To Know About 'Firefly Lane' Season 2 Part 2
By Gretchen Smail
Everything To Know About 'The Peripheral's Potential Season 2
By Brad Witter
17 Wednesday Addams Quotes For Every Situation
By Grace Wehniainen
Get Even More From Bustle — Sign Up For The Newsletter