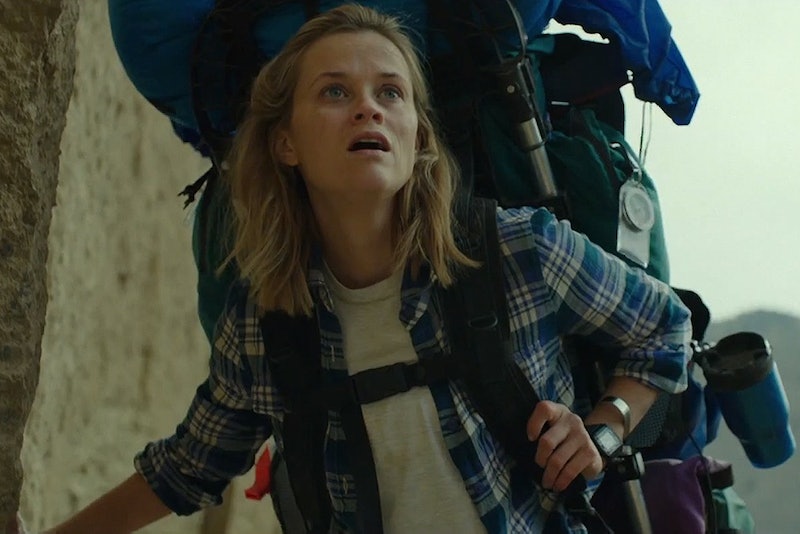 There are so many beautiful, challenging, and awe-inspiring moments in the big screen adaptation of Wild , it's nearly impossible not to leave the theater wanting to take a soul-searching journey of your own and tell every woman you know to do the same. But it's not just watching Reese Witherspoon walking in Cheryl Strayed's boots for 1,100 physically demanding miles that will make you feel empowered and amazed, but the emotional journey the film takes you on as a woman. Wild is a feminist film, through and through. In fact, during one important scene on her trip, Cheryl (Witherspoon) is asked by a male journalist if she's a feminist, and she proudly and defiantly replies that she is. (Heads up: some Wild spoilers ahead.)

Wild—both the film and the memoir— is feminist in its very nature. Here is a woman who hikes the oft unforgiving Pacific Crest Trail, solo, over the course of 94 days. While Strayed encounters some men along the way who make her feel uneasy (a sobering, startling reminder that men can be more of a threat than the elements of Mother Nature), she mostly earns the respect and admiration of the mostly-male hikers she meets along the way. But that's not what, or who, Strayed takes this journey for. Her time on the PCT was to challenge and find herself, after the devastating loss of her mother and the deterioration of her marriage left her feeling lost. (The film also deeply explores the nature of loving, supportive mother-daughter relationships, and how they shape women's lives.)

Along her way, Strayed faces some difficult obstacles and terrain, but no matter how many times she feels she can't do it (or how many men tell her that her hike is something she shouldn't be doing alone), she drowns those voices out and does exactly what she set out to do.

But it's not just Strayed's hike that makes her a feminist trailblazer, it's her acceptance of herself, warts and all. Wild also chronicles a chapter of Strayed's life that included drug use, extramarital affairs, abortion, and divorce. While Strayed struggled to find herself after the life she knew fell apart, she eventually comes to terms with the fact that all of those things she experienced were pivotal, influential building blocks in her life. She does not regret the things that she did, rather, she knows she is a multi-faceted woman who endured highs and lows.

So many women on film, and in literature, are shamed for their sex lives or their enjoyment of sex, but Strayed is not one of those women. She's a breath of fresh air, and a voice that many women can relate to, but rarely hear portrayed positively in pop culture. Strayed may have not had a straight and narrow path in life, but no feminist truly does. She challenges the norms, the expectations of society, and most importantly, herself. Wild perfectly captures that untamed, unstoppable feminist spirit.